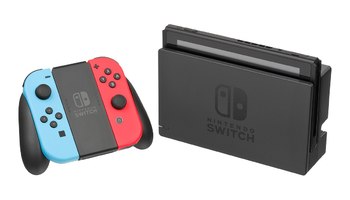 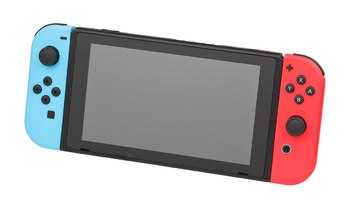 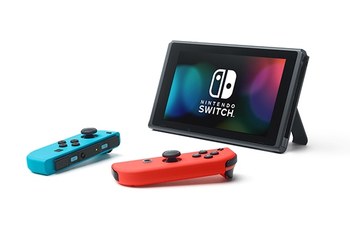 The Wii U put Nintendo into a rough spot; it followed up Nintendo's best selling console by being their worst-selling system aside from the Virtual Boy. The reasons for this were varied, but one of the more commonly cited ones was that its GamePad controller failed to capture people's attention like the Wii Remote did. However, most Wii U owners agreed that the GamePad had one good feature going for it: Off-TV Play. While games with second-screen featuresnote which send separate images to the TV and GamePad screens to serve different gameplay purposes, like the Nintendo DS and Nintendo 3DS didn't catch on, most games for the system did not require a television to be played, as they could be played on the GamePad screen. While this gave players the ability to enjoy their Wii U games even when a TV was unavailable, it lacked the versatility and flexibility of a true portable system since the GamePad only worked within a short range of the console.

Meanwhile, despite an initially slow and painful start to its place in the industry, the Nintendo 3DS managed to maintain Nintendo's place in the portable gaming market. It defeated the PlayStation Vita in a Curb-Stomp Battle and proved that dedicated gaming devices still had a place in the market despite Mobile Phone Games gaining dominance in the 2010s. And so, Nintendo found themselves with a poor-selling home console whose best aspect was that it didn't require a television 90% of the time, a very good selling portable console that retained Nintendo's crown as rulers of handheld gaming, and a continued desire to find new ways for gamers to play.

Of course, there were even more issues to consider, namely the divide in gaming preferences that Japanese and Western gamers exhibited. In Japan, portable gaming is more popular: the Nintendo DS had become a cultural landmark during the 2000s and directly led to the subsequent dominance of dedicated handhelds and smartphone games in the region. In the West, home consoles and PCs are vastly more preferred by gaming audiences, with the desire for greater graphical power trumping on-the-go play. The end result was that most developers couldn't easily leverage both markets: Western developers found that porting games from home consoles and modern gaming PCs to handheld consoles was damn near impossible unless the game they were trying to port was deliberately designed with older/lower-end hardware in mind, while Japanese developers found porting their handheld games to be similarly burdensome due to the additional costs inherent in HD development and the need to rework gameplay for form factors that lack a touch screen.

All of this was dealt with elegantly in one single move with the Nintendo Switch.

The Nintendo Switch is Nintendo's seventh home gaming console which was released worldwide on March 3, 2017. The console was first announced in March 2015 by Satoru Iwata, just months before his death, under the codename "NX" and with the promise that it would be a "brand-new concept". On October 20, 2016, the console was officially revealed

as a hybrid video game system consisting of a tablet-like touchscreen monitor that docks into a station at home for TV play: removing the console from the dock switches it from a home console into a portable console.

The Nintendo Switch uses a pair of controllers, known as Joy-Cons, that attach directly to the system for portable play, while also being capable of being used with a grip or held in each hand individually, similar to the Wiimote and Nunchuk for both the system's home and portable configurations. In addition, the Joy-Cons (known as Joy-Cons L and R) can be used separately, allowing for local two-player gaming without the need to buy additional controllers, hearkening back to how the Nintendo Entertainment System came bundled with two controllers itself. note When held horizontally, each Joy-Con is essentially a small SNES controller, with the SL/SR shoulder buttons being hidden when attached to the system. That said, any games that have multiplayer but require things like a second analog stick or ZL/ZR buttons (such as a First-Person Shooter) will require you to buy another set of Joy-Cons or a more traditional Pro Controller if you want to play with a friend. The Switch also has a more traditional "Pro Controller" available, and it too can be used in both configurations. Each Switch can support up to eight individual Joy-Cons (or four pairs of Joy-Cons/four Pro Controllers) and can connect locally with up to seven other Switch consoles.

Like the DS and 3DS, the Switch stores physical copies of games on Game Cards, a proprietary type of ROM cartridge based on the SD Card (flash memory) format; continuing a tradition for handhelds, but breaking the three-generation streak of Nintendo's home consoles storing games on optical discs. As a result, the Switch is the first cartridge-based home console since the Nintendo 64 twenty-one years prior. It is also the first Nintendo home console system to be region-free, something Nintendo themselves noted during the Switch's launch presentation.

The Switch also introduced Nintendo's first paid online infrastructure in September 2018, aptly known as Nintendo Switch Online or NSO. (Online play for games like Splatoon 2 was free prior to the launch of NSO.) For only US$20 a year you gain access to online play, cloud saves, exclusive titles, and a downloadable library of NES and SNES games. A higher paid tier, known as the Expansion Pack, was released in 2021 for $50 that also gave acces to Nintendo 64 and Sega Genesis games. Despite its low entry fee, NSO has been heavily criticized for its inconsistent utilization of cloud saves, poor implementation of basic features such as voice chat (a separate phone app is required and it only works with friends), and the infamously poor netcode of games such as Super Smash Bros. Ultimate that bring the need to pay for online into question.

Nintendo initially claimed that the Switch would act as a "third pillar" to the Wii U and 3DS, only to then announce the Wii U's discontinuation not too long afterward. Similar statements were made for what the DS was to Nintendo GameCube and the Game Boy Advance, and similarly enough, the GBA was quietly discontinued in the late 2000s in the face of the DS's success. The key difference is that Nintendo was clearly hedging their bets in the latter case, as the Game Boy Advance line was still doing incredibly well in sales: should the DS have failed, they had an easy out and could dismiss the dual-screen device as a fun experiment. In contrast, the Wii U was an undeniable flop by the time the Switch was even announced. Everyone knew it would be pointless to try performing an act of necromancy upon it, and that there would be no quick fall back plan if the Switch was dead-on-arrival.

Much can be and has been said about how confusing the Wii U was from the moment of its reveal, with Nintendo being unable to clearly communicate that it wasn't a pricey add-on for the Wii for the entire lifespan of the product, in the rare event that they were even able to make consumers aware that the product existed. Nintendo learned from this, and from day one, advertising for the Switch far more clearly communicated the console's key feature (the three play modes and the ability to easily alternate between them), and there are more frequent ads for the console itself and its growing game library year-round. Not only that, but the Switch cemented a stronger brand identity by abandoning everything related to the Wii brand outside Miis, which can still be used as system avatars and appear in a small selection of games.

Despite some hardware issues that still persist as of 2021, the most common being "Joy-Con drift", where the Joy-Con control sticks start exhibiting inappropriate movement due to dust and debris entering its internals, the Switch became an overnight success, selling 2.74 million units by the end of its first month (making it the best launch for any Nintendo system to-date). The console would outsell the Wii U's entire lifetime in less than a year, followed by the GameCube and Nintendo 64 the following year, the SNES in its third year, and the NES in its fourth. Nintendo themselves predicted that the Switch could sell as much as the Wii by the end of its life cycle, and there are projections suggesting that, by the end of the Switch's life cycle, it could sell nearly as many units as Wii, if not more.

One year after release Nintendo would try to increase that success by innovating the system even further with Nintendo Labo, a series of DIY development kits for the Switch that consists of gaming software and cardboard cutouts that can be assembled into accessories called Toy-Cons. Releasing on April 20, 2018, the first sets were released: the "Variety Kit" and the "Robot Kit". The "Vehicle Kit" would be released in September and Labo "VR Kit" the following April.

On September 20, 2019, Nintendo released the Nintendo Switch Lite, an entry-level, budget alternative to the original (costing $200USD vs. $300USD). The Lite foregoes the core feature of its older sibling, its hybrid nature, to serve purely as a handheld console. In addition to lacking TV-out, the controls are integrated with the system, so any games within the Switch library that require individual Joy-Con use, such as 1-2-Switch, require external Joy-Cons to be connected to the system; HD Rumble and the IR Camera are also removed, and the split D-pad is swapped out for a standard one, so those missing features also require external controllers. Alongside the Switch Lite, Nintendo also released a revised version of the original Switch that incorporated a more power-efficient chipset, thus increasing battery life and reducing heat output, in addition to improved build quality to address physical Joy-Con issues present in some builds of the previous batches of the Switch.

On October 8, 2021, Nintendo released the Nintendo Switch (OLED model), positioned as a $350USD premium option in the Nintendo Switch family. As the name suggests, this version of the system boasts a larger 7 inch OLED screen, a bigger kickstand, 64GB of built-in memory, and improved onboard speakers for better sound quality in handheld/tabletop mode. A revised dock released alongside the OLED model would add a dedicated wired LAN port, replacing the USB 3.0 port of the previous revision; the original dock could only utilize a wired network connection via a USB-to-Ethernet adapter. The new dock can be used with previous models of the standard Switch.