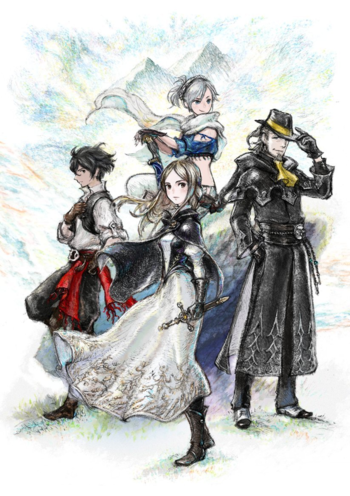 "It is time to choose. Accept your fate and await oblivion... or make a stand and fight for survival. Step into the light, young hero! Be brave!"
Advertisement:

The story is set in a new world, on the continent of Excillant, where five mighty kingdoms reside. Two years prior, the four elemental crystals that keep nature in check were suddenly taken away by evil forces led by Lord Commander Adam of Holograd, who aims to use their power to Take Over the World, putting the citizens of the kingdoms in danger. Fleeing from her fallen kingdom of Musa, the guardianship of the four crystals, Gloria goes on a journey to retrieve them. On her journey, she meets Seth, a sailor not native to Excillant who happens to wash up ashore thanks to the crystals saving him from an unseasonal storm. They are both accompanied by Elvis, a scholar from Wiswald who inherited a mysterious book from his mentor that he hopes to decipher by gathering Asterisks; and Adelle, a skilled hired sword Elvis enlists to help him on his task. The four decide to travel together, becoming the new 4 Heroes of Light of the tale.

The reveal trailer can be found here

, and the Nintendo Direct trailer can be found here