Video Game / For the Frog the Bell Tolls 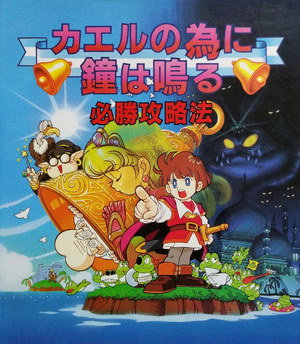 And frogs. A lot of frogs.

For the Frog the Bell Tolls (original title: Kaeru no Tame ni Kane wa Naru) is an Action RPG for the Game Boy, developed by Nintendo and released in 1992. It was influenced by their own The Legend of Zelda series, which inherited some elements of this game. The later released The Legend of Zelda: Link's Awakening shares an engine with it and has a cameo by Prince Richard in a house full of frogs and the even later released Super Mario RPG had a cameo by Prince Richard in frog form as an early non-boss enemy in the Japanese version (he's named Frogog in the translation). Since then, For the Frog the Bell Tolls hasn't gotten much acknowledgment by Nintendo, but Dr. Arewo Stein managed to appear as a recurring NPC in Wario Land 4, and there is a sticker of the Prince of Sablé in Super Smash Bros. Brawl. In Super Smash Bros. for Nintendo 3DS and Wii U and Super Smash Bros. Ultimate, the Prince of Sablé appears as an Assist Trophy.

The game never got a release in America or Europe, but a complete fan translation exists.

Alternative Title(s): Kaeru No Tame Ni Kane Wa Naru, The Frog For Whom The Bell Tolls