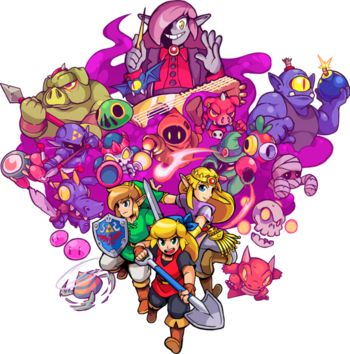 Every world has its evils. And when the balance of power is inevitably lost, it's up to the courageous and the wise to restore it. But sometimes? Sometimes they need a little extra help.
— Opening narration by Cadence
Advertisement:

The Kingdom of Hyrule has found itself in peril yet again. A court musician named Octavo, wielding a magical lute, has managed to lock up the king and place royal knight Link and Princess Zelda into a deep slumber. With the other Triforce wielders out of the way, the musically-gifted sorcerer uses the Triforce of Power to enhance his instrument into a Golden Lute and gain control of all the monsters in Hyrule, throwing the land into chaos. However, just as hope seems to be lost, the remaining pieces of the mystic relic combine their energy to summon a hero from another world. One who just so happens to have the experience and skills necessary to tackle a foe as strange as this. With the land now cursed with an unwavering melodic beat, Cadence, Link, and Zelda must groove to the music in order to defeat Octavo and take Hyrule back.

Cadence of Hyrule: Crypt of the NecroDancer feat. The Legend of Zelda is a Nintendo Switch game developed by Brace Yourself Games and published by Nintendo.note Published by Spike Chunsoft in Japan. As the name suggests, it is a sequel to Crypt of the NecroDancer that doubles as a crossover with The Legend of Zelda, blending the rhythm-based movement and combat and roguelike dungeons of the former with the overworld exploration and puzzle-solving elements of the latter.

The game was announced on March 20, 2019 at the end of a Nindies Showcase and released on June 13, 2019. Danny Baranowsky returns to compose the soundtrack, consisting of remixes of classic Zelda tunes, with Jules "FamilyJules7X" Conroy also returning as one of the instrumentalists. Among the art team are Paul Veer and Lucas "Midio" Carvalho, the former serving as art director, and both being known for their work on Sonic Mania.

On December 18, 2019, the game gained a new campaign called "Octavo's Ode", that is unlocked after beating story mode. In it, the player takes the role of Octavo as he works to assemble his four champions to accomplish his goal. In addition, a new "Dungeon Mode" was added, which restructures the entire game into Crypt of the NecroDancer's traditional rogue-like format. On July 20, 2020, a "Mystery Mode" difficulty was added, which obscures item and enemy identities.

The game also has three sets of paid DLC. Buying the Season Pass for all three unlocks red and blue alternate outfits for Link and Zelda.

A physical version of the game that includes all the aforementioned DLC released on October 23, 2020.

Cadence of Hyrule contains examples of: