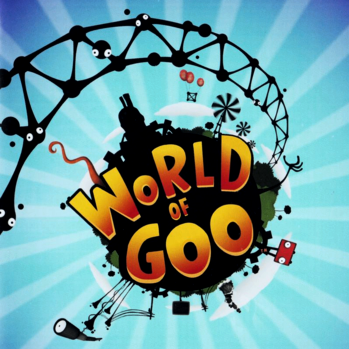 The millions of Goo Balls who live in the beautiful World of Goo don't know that they are in a game, or that they are extremely delicious.
Advertisement:

World of Goo is an indie Puzzle Game by 2D Boy

, a two-person team consisting of former EA employees Kyle Gabler and Ron Carmel, with some help. In it, the player constructs intricate structures from intelligent globs of goo, with the deceptively simple goal of leading the remaining free members of the swarm to each level's exit pipe. Deceptive, because this two-dimensional world is contrived to put as many highly varied obstacles into your path as possible.

Spun off from the simpler Tower of Goo student project, the gameplay is pushed into an increasing variety of directions by the long string of newfound species of goo, each possessing unique properties to experiment with. The slowly building story is told through a deliberately primitive, child-like art style in the rare cutscenes, and more profusely through the text of helpful signs posted in each level by the mysterious and enigmatic Sign Painter.

The whole of Chapter 1 is in a free demo

for Windows/Mac/Linux. The full version can be found on basically any modern gaming device from the past 8 years, being ported to WiiWare, iOS, Android, the aforementioned Windows, Mac and Linux, and most recently, the Nintendo Switch. A bonus sixth chapter on the Moon was originally planned for retail but never materialized. A whole community of user-made levels and other add-ons can be found at GooFans

Do not confuse with Word of God.