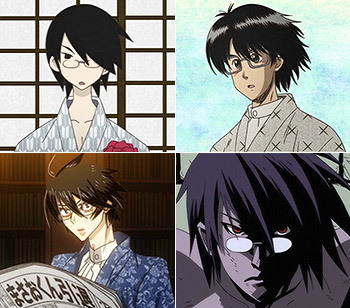 "I'm in despair! The fact that they spent the entire episode shifting my artstyle around has left me in despair!"
"I swear they just had an honest-to-goodness romantic moment!!
The art turned straight n' all!"
— Christine, Girls Next Door, "Datus Interruptus"

note She means the art style switched from cartoon-y to more traditionally beautiful, signifying a mood shift from joking to earnest.
Advertisement:

This is a scene within a single work in animation or print where the visual art suddenly and intentionally shifts into a different style, usually for homage or parody purposes. Frequently occurs during flashbacks, particularly "Rashomon"-Style sequences (see Retraux Flashback), and is often paired with a brief Out-of-Genre Experience. Particularly abrupt shifts can be rather scary.

Not to be confused with instances where the visual art unintentionally changes as a result of, for instance, the animation being subcontracted to several different studios. For this, see Off-Model. Neither should it be confused with cases where the style changes because two or more unrelated anime have been stitched together by an American distributor — for this, see Cut-and-Paste Translation.

Also should not be confused with Art Evolution, which is a gradual and more permanent art change over time as the artist gets the hang of drawing the series.

A Sister Trope to Art-Shifted Sequel, where a work changes its visual art style in its next incarnation.

Can overlap with Show Within a Show, Deep-Immersion Gaming, Disneyesque and Super-Deformed.

Compare Non-Standard Character Design. Contrast with Medium Blending, where it isn't just the visual art style but the whole medium (animation to live-action, 2D to 3D, etc.) which changes.

See also Stylistic Suck, a phenomenon used to visually distinguish a show-within-a-show from the work that uses it.