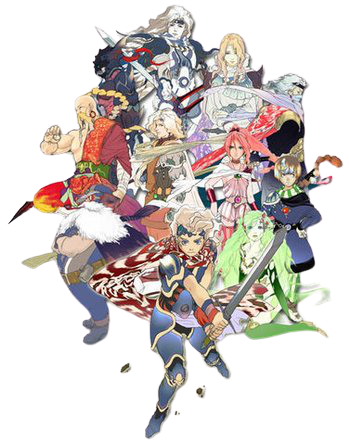 A New Moon Leads To A New Destiny.
— Tagline
Advertisement:

Final Fantasy IV: The After Years is part of the moon-droppingly popular Final Fantasy series. It is a direct sequel to Final Fantasy IV, taking place 17 years after that game (roughly the same amount of time as had passed between the games' release dates). It features the children of the original cast, along with some new characters and returnees from the original, as they investigate the return of the second moon.

The game was originally released for cell phones in Japan, and was released on WiiWare June 1, 2009 in the US. The entire game cost 3700 Wii points total for 9 story segments (13 chapters in all). Following the success of the DS prequel in iOS / Android form, TAY got the same treatment, as in, it looks exactly as you'd expect the game to look as it if was on the DS. This version of the game came out in November 2013.

And an extra chapter for the PSP port that covers the 17 years between Ceodore's birth and the start of the game.

This page assumes that you played and completed Final Fantasy IV, so beware of spoilers if you haven't.

Alternative Title(s): The After Years