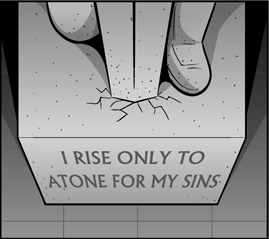 This is why you don't want to take the Atoner for granite.
"Long is the way, and hard, that out of Hell leads up to Light."
— John Milton, Paradise Lost
Advertisement:

Once, there was a major villain named Bob. He committed every crime one could think of, and he did it with a song in his heart and a skip in his step. Then, something happened to make him see the horror of what he was doing. He realized how much pain he had caused, and he set out on a personal quest to try to make it right.

The Atoner is an evil character who has realized the error of his ways, possibly wants to make amends, and has decided that they will do so via heroic deeds. Simple imprisonment won't do, because it does nothing to make recompense for what he's done wrong. Besides, he still has all these amazing skills and resources from the Bad Old Days — wouldn't it be better to use them for good?

The problem is, Bob often has to wrestle with the temptation to return to his old ways, along with the massive guilt built up over years of carefree evil. Also, said previous villain skills usually involve killing people in very messy ways, which can result in karmically harmful situations. Other times Bob's evil side won't go down without a fight, and manifests itself as an Enemy Within. Ultimately, it comes down to the fact that morality isn't a book that can be balanced—no amount of babies saved now will bring Bob's past victims back to life. The Atoner usually realizes that "Redemption is the path, not the destination" thanks to The Redeemer and continues for the rest of his life.

Sometimes 'the rest of his life' is short because Redemption Equals Death. Generally the only Atoners who avoid this are main characters who are already in the atoning stage by the series' start. Atoners often end up as Knights in Sour Armor. Those who believe redemption inherently equals death may well become Death Seekers.

A subtrope of this is "Assassin Wants to Quit". Stories involving them allow us to cheer on the assassin as they battle their former employers using the same murderous skills they honed during their previous career. Atoners sometimes go on a Redemption Quest in order to atone. If their deed of atonement is especially painful, it may overlap with The Penance.

Would-be Atoners who are not sincere are trying to Buy Them Off. Not to be confused with The Aloner, though they can both coincide if the character is trying to atone for killing off everyone else on the planet. And especially not to be confused with The Stoner (unless they turned to drugs to cope with their guilt). The Atoner may face rejection and hatred from those who don't believe he's reformed, which is Reformed, but Rejected, and more importantly, he must be careful not to run into the Heel–Face Door-Slam. In some instances, however, there are characters who will acknowledge The Atoner's change of heart, but do so in a grudging manner. The Atoner must also beware of one character who actively seeks to end his path to redemption.

The success rate of atoners depends on where the work sits on the Sliding Scale of Idealism Versus Cynicism. In more idealistic works, or at least ones that posit that people can change for the better, atoners may have a greater chance of success, as proof that no matter one's actions may have been in the past, it's always possible to change for the better and do good.

Genuine atoners have a high chance of becoming The Woobie, especially if they were an Anti-Villain in the first place. See also, Be All My Sins Remembered, where they continue to suffer a guilt complex over their past misdeeds. Contrast with My Greatest Failure — instead of a formerly evil character turning from their past, a good character feels the need to atone for not preventing a bad outcome (regardless of whether they could have changed anything), and Retired Monster — a villain who has retired from their villainy but hasn't shown any regret or remorse for their misdeeds nor has made any attempt to redeem themselves. The Atoner may have experienced Go and Sin No More, and may enact a Self-Punishment Over Failure or have a Guilt-Induced Nightmare.

Having screwed over Cole in the first game, Zeke has since been trying to make up for it.

Having screwed over Cole in the first game, Zeke has since been trying to make up for it.