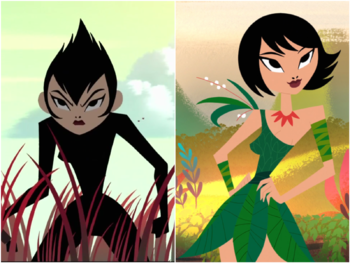 Ashi turns over a new leaf.
"But there is something that I need your help with. I can't wear these Kree colors anymore. And since you are obviously the only person around here with any sense of style..."
— Carol Danvers to a young Monica Rambeau, Captain Marvel (2019)
Advertisement:

Bob has decided to give up his evil ways. Perhaps he met a special person, found a few True Companions, had a Heel–Faith Turn or Heel Realization or maybe he became a pacifist. Whatever the reason, he's resolved to be good from now on. In order to show that his old self is gone for good, he decides to change his outward appearance. Bob gives himself an Important Haircut, puts on a new suit, gets rid of his evil tattoos, and so forth. Just don't rule out Reformed, but Not Tamed.

Popular changes include going from generic evil colors like red and black to generic good ones like white and gold, shaving the Beard of Evil, growing your hair out from the Bald of Evil, and covering up evil scars. A cape is also a good choice.

After being acquired by Tekkadan, the Gusions' original heavy dark green Armor from the Brewers was stripped and replaced with a more agile coffee tan Armor.

After being acquired by Tekkadan, the Gusions' original heavy dark green Armor from the Brewers was stripped and replaced with a more agile coffee tan Armor.