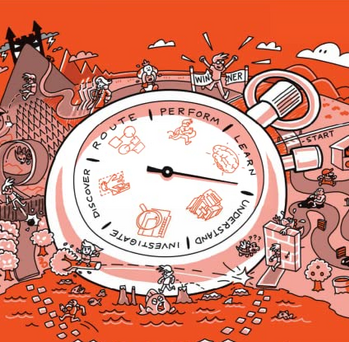 Iji throws herself into the following in-game cutscene with great haste. No, his life was not worth the 15 seconds to prevent that from happening. This is a speedrun, bro!
— Daniel Remar's Iji speedrun.

A playthrough of a game with the intent of completing it as fast as possible for the purposes of entertainment and/or competition.

There are two types of speedruns: "regular" and "tool-assisted".

In both versions, Sequence Breaking, route planning, and tight play are the key. The notion of completing a game as fast as possible is frequently an example of Emergent Gameplay (excluding those games where speed is the whole point, such as racing games). It is worth noting, however, that some games simply don't have any (or have extremely few) currently known glitches to take advantage of, and as such no sequence breaking or out of bounds of any sort can be performed, meaning that the speedrun is simply a matter of figuring out the most optimal way through every required part of the game.

There are three common, typical categories: "100% run" (where the player tries to collect everything in the game as quickly as possible), "minimalist runs" or "Low%" (where the player must skip all non essential items while still completing the game as quickly as possible), and the "pure speedrun", also known as "Any%", or "Beat the game", "Complete (character)'s story", and so on, depending on the game. Any% runs usually comprise completing the game as fast as possible, with nothing off limits to assist with this goal, be it glitches that skip 80% of the game, momentum conservation, and other huge game changers. Many a popular Self-Imposed Challenge are also up for grabs.

Speedruns are usually created as an attempt to show off one's skills. They are not for people who want to enjoy the plot or explore the world. Due to the many methods used in speedruns, and overall design of different games, it is not a good judge of how long a game is for the average player at all; for instance, there could be exploitable bugs that are only possible to pull off in a Tool Assisted run, and others that can be done in realtime with only a great deal of dedication, skill, and luck. A specific example of this: some Tool Assisted runs use glitches that require hitting left and right at the same time, or up and down at the same time; those ones are basically impossible on any standard unmodified controller. The optimal path can be radically changed at every step based on whether or not these bugs are used.

, the top five games with the most players* basically games with the most people attempting speedruns, not necessarily the most active, and it's worth mentioning some games have their own dedicated fan speedrunning sites in their speedrunning community (as of October 30th, 2021) are Minecraft: Java Edition (9,733 players), Super Mario 64 (6,069 players), Roblox: Speed Run 4 (5,118 players), Super Mario Odyssey (4,523 players), and finally Minecraft: Bedrock Edition (3,341 players).

. For speedruns and speedrun races performed live for your viewing pleasure, head over to SpeedRunsLive

. For rundowns of the history of some popular speedgames, see Summoning Salt's playlist