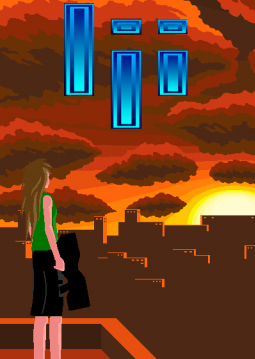 Iji is not having a good day.
Advertisement:

An inspired twist on the "lone warrior fights against impossible odds" story rehashed by so many other video games, Iji is a freeware action/adventure platform game created by Daniel Remar. Iji is a 20-year-old girl who accompanies her family on a tour of the D.C.M.F.P.R. Research Facility, where her father works, when strange lights lance through the clouds outside.

Iji awakens six months later to discover that her father and most of the researchers are dead and that a handful of scientists implanted her with nanotechnology in hopes of battling the alien threat that has taken over the facility. Her little brother Dan is hidden in a control room, which allows him to help Iji understand her new abilities and direct her to objectives.

A combination of straight action with adventure and RPG elements, it tells a story where Iji questions the necessity and effectiveness of violence, and either extreme is a valid strategy.

As a freeware game, it is available here.

Ver. 1.7, which uses a new engine and features new endings, weapons, and a remade soundtrack, was released in March 2017.

open/close all folders
# to F
G to L
M to R
Advertisement:
S to Z