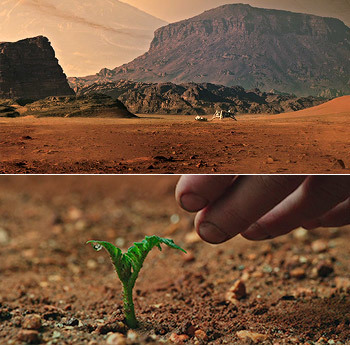 "If there is one thing the history of evolution has taught us it's that life will not be contained. Life breaks free, it expands to new territories and crashes through barriers, painfully, maybe even dangerously. [...] life finds a way"
— Ian Malcolm, Jurassic Park
Advertisement:

Pan across a desolate landscape. Was it a war? A science experiment Gone Horribly Wrong? Divine Retribution at last for the bastardry of humanity? Who cares? All is dead. All is lost. It's the end. Or is it?

Out of the dust there sprouts a plant. It could be just a shoot with a few little leaves, or perhaps a single, tremulous flower. A tree that seemed dead may have shoots on it, or flowers, or even a bit of bark stripped away to reveal a green, wick heart. Is it a Hope Spot? Or does it mean that the Darkest Hour is over? Who cares? Maybe the heroes have earned their happy ending after all. And that's what's important.

Often used as a way to show that Hope Springs Eternal. Compare Fisher King and Fertile Feet; this can be a Maybe Magic, Maybe Mundane version of either one. See also Babies Ever After.