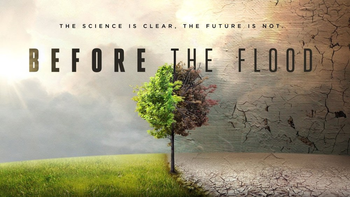 Dale: I say let the world warm up, let's see what Boutros Boutros Ghali has to say about that. We'll grow oranges in Alaska!
Hank: Dale, you giblet-head, we live in Texas! It's already 110 in the summer, and if it gets one degree hotter, I'm going to kick your ass!
— King of the Hill
Advertisement:

Works that prominently feature global warming often include a Green Aesop. It's a probable cause for a Natural Disaster Cascade in fiction. Particularly dramatic cases may lead to a Flooded Future World. For what happens when climate changes too far in the other direction, see Glacial Apocalypse.