Film / Oh! What a Lovely War 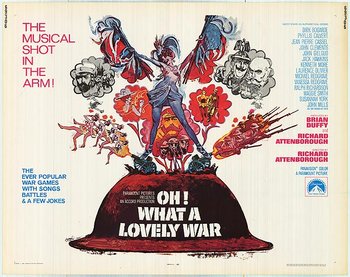 Based on the 1963 stage musical of the same name (itself derived from the 1962 BBC radio play The Long Long Trail), Oh! What a Lovely War tells the story of World War I, from the moment of the various world leaders at the time forming their alliances to the signing of the Treaty of Versailles. Made in 1969 and directed by Richard Attenborough, the film boasts an All-Star Cast of 20th-century British film and theatre, including Dirk Bogarde, Edward Fox, John Gielgud, Jack Hawkins, Ian Holm, Laurence Olivier, Michael Redgrave, Vanessa Redgrave, Ralph Richardson, Maggie Smith, Susannah York, and John Mills (though most only appear in cameos).

The film is a surreal blend of pre-1914 fantasies of war as a game in which the only real thing at stake were honour and glory and the reality of the kind of experiences faced by the soldiers during the war. The entirety of the film takes place ostensibly on Brighton Pier (a popular English seaside destination) where the war takes the form of a pier-side attraction, and where all the meetings between the heads of state, the British aristocracy, and the war generals take place. From there, the action regularly cuts to show the real world where we see the true consequences of the "war game" being played.

Because of the play being essentially nothing but a series of short vignettes strung together by a Pierrot show, the film predominantly centres around the Smiths: a large family who all take different paths through the conflict - though they themselves are often not the focus of the scenes they're in, merely being around to witness events (such as the short-lived Christmas ceasefire between the British and German troops on the front lines). Besides the Smiths, the film also focuses on the decisions made by Sir Douglas Haig.

Mostly though, it just makes sure that you understand the concept of "war is hell".