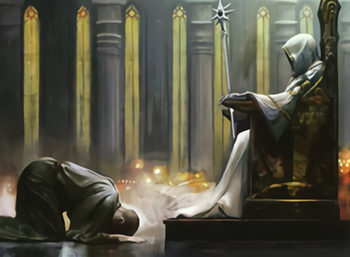 "By the time your knees have worn through your robe, you may have begun to learn your place."
Eden: Why? Why did my father kill [her]?! Doesn't even my father... make mistakes?
Leo Mycenae: Wh-what did you say?
Eden: Couldn't my father also make a mistake?
Leo Mycenae: What are you saying, lord Eden? We've sworn our loyalty to lord Mars. That means that we must never question his actions!
— Saint Seiya Omega
Advertisement:

This trope applies to characters that are sources of authority and those who follow them. Typically the followers have faith (sometimes blind) in the competence, fairness and infallibility of the authority they choose to follow. These followers would never say "My Master, Right or Wrong", firstly because they're not evil, and secondly because the idea that this authority is capable of error and/or immorality may not even cross their mind. Thirdly, if it does they may justify it as the authority "knowing better" or having a view of the "big picture".

The authority in question rarely does much to dispel this notion and may in fact Pridefully think of themselves as infallible to the point of having an Omniscient Morality License (they very much don't though). While they may be a Reasonable Authority Figure, it's common for this trope that they see themselves as unquestionable arbiters of Law and Good (or Might Makes Right for villains), and questioning their judgement is at the least naive foolishness or at worst tantamount to treason. The plot comes in just as they make a pretty bad error of judgement (or go crazy/evil) and a fair chunk of their subordinates/the populace disagrees with them, and the disagreement simmers into open rebellion before long.

These followers will often obey their leader even when they are Ordered to Die. Compare/contrast Honor Before Reason and I Don't Pay You to Think. See also Undying Loyalty, My Country, Right or Wrong, Just Following Orders. See also Artificial Insolence when disobeying the player's orders is a game mechanic.