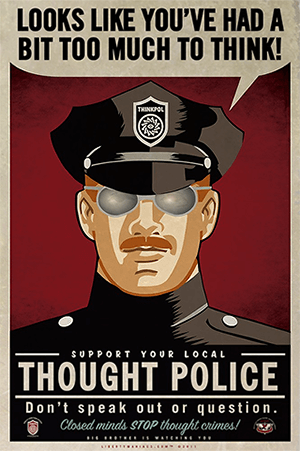 Used with permission.
In the far distance a helicopter skimmed down between the roofs, hovered for an instant like a bluebottle, and darted away again with a curving flight. It was the Police Patrol, snooping into people's windows. The patrols did not matter, however. Only the Thought Police mattered.
— George Orwell, 1984
Advertisement:

If our protagonists are visiting Commie Land or a Banana Republic, they will never run into the Secret Police.

Why would they? You only need a police force if there is crime, and the country the heroes are in either has the lowest crime rate in the world or absolutely no crime at all. Any troublemaker just tends to "disappear" overnight; people who see their neighbors being taken away know it's best to look away and not guess why. And as there are no criminals, there's also no need for any court of law, jury by peers, or state prisons.

Common in Dystopian fiction. If the Secret Police existed and had their own military force, then it would be a State Sec. If they don't officially exist, they might be No Such Agency.

If the culture isn't so bad, or the police—while secret, or at least very quiet—aren't altogether evil or brutal, they may just be The Men in Black.

For a variety of reasons, Russia is the historical king (or tsar, if you will) of secret police. Russia has had some kind of secret police-like agency for most of its history: