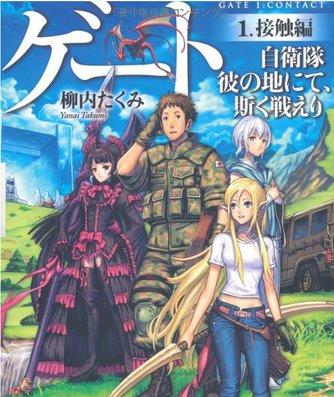 So a soldier, an elf, a mage, and a demi-goddess walk into a bar...
Advertisement:

In August 20XX, a portal to a parallel world known as the "Gate", suddenly appeared in Ginza, Tokyo where monsters and human warriors wearing ancient armor poured out of the portal, killing everyone in their way and trying to claim the area as their own. This would later be known as "The Ginza Incident". Immediately after the attack, the Japanese Ground-Self Defense Forces launches a counter-attack, repelling and pushing the invaders back to the Gate and reclaiming Ginza.

Hoping to establish diplomatic relations with the people beyond the Gate and capture the ones responsible for the massacre of Ginza, the JSDF, under orders by the Prime Minister, takes over and enters the Gate where they dispatch the Third Reconnaissance Team to scout the "Special Region" led by 33-year-old First Lieutenant Youji Itami. Itami was there when the Ginza incident happened and, luckily for him, exploring the Special Region is a dream come true since the Lieutenant is an Otaku. While the 3rd Recon Team explores the Special Region, back on Earth, the major powers take a special interest in the Gate...

Gate - Thus the JSDF Fought There (Gate - Jieitai Kare no Chi nite Kaku Tatakaeri), is a Japanese fantasy novel series by Takumi Yanai. Originally serialized online on a novel website called Arcadia, it was published in book form by Alphapolis in 2010. There are 5 novels, followed by five Gaiden books each focusing on what the important female characters were doing during an important event. A "sequel" (or "season 2") for the books was recently launched, with the first new book published in 2014.

A manga serialization started in July 2011, while a more Light Novel-style rewrite/reprinting (complete with revamped and polished character designs) was started in 2012.

An anime adaptation was announced in mid-December 2014 and was released in July 2015. After the first twelve episodes aired, the series took a hiatus and resumed in January 2016. Sentai Filmworks has the series licensed for North American release and it is available for streaming on Crunchyroll

Gate! Yonkoma is a 4-Koma comedic spoof of the series.

An iOS/Google phone game called Gate: Brave Scramble was released by Bandai Namco Entertainment in 2016 for the Japanese market. It is currently discontinued from service.

Mei Company (Mei Kon) is a Magical Girl manga that Itami enjoys reading. It was eventually given its own manga by Takumi Yanai.

Compare Outbreak Company, where the more civilized means of commercialism are employed.

First Lieutenant Itami is many things: proud Otaku and Slacker of the JSDF... and also a member of the Ranger Corps.

First Lieutenant Itami is many things: proud Otaku and Slacker of the JSDF... and also a member of the Ranger Corps.