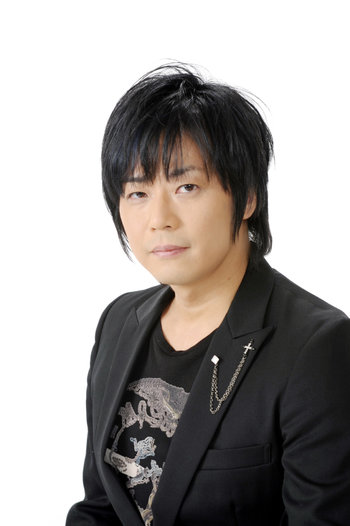 Koji/Kouji Yusa is a seiyuu born August 12, 1968 who was married to Kanako Mitsuhashi from 2008 to 2012. A Nice Guy, he is known for his distinctly smooth, soft voice. As a Kyoto native, he tends to use that accent in many of his roles.

Usually, his roles are those of Bishōnen, or affable adult males, sometimes bordering Chivalrous Pervert territory. Some of Yusa-Yusa's roles are Yaoibait or Mr. Fanservice. And interestingly, quite a few of them (Gin, Ayumu, Vincent, Lau) possess Eyes Always Shut.

He is most notable for his roles as Gin Ichimaru from Bleach, Urataros from Kamen Rider Den-O, Hyoubu Kyousuke from Psychic Squad and Shadow the Hedgehog. He has also voiced two characters in stories by Ryūkishi07. It might be a good idea to keep an eye on him...

This is who I am!/This is my answer!