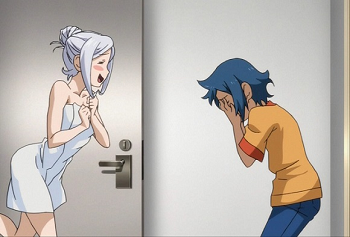 In media, characters that have just bathed or showered will often wrap themselves in towels to preserve their modesty, even if there is no-one else around. This is often done to show a character has been interrupted while or shortly after they were bathing, as they had no time to get properly dressed yet. Towels are also common attire in public baths, locker rooms, spas, and saunas.

Men will wear the towel wrapped around the waist hanging from their hips while women will wear it wrapped around the torso hanging from their bust. This conveniently covers any body parts Moral Guardians might find objectionable, but is often Truth in Television just out of practicality: the towel wards off a potential chill and soaks up any water left remaining on the skin after bathing, plus those who are accustomed to covering themselves while others are around will often do so out of habit, even if they are alone. The differences in how males and females wear it probably stems as much from men and women having different places to hang their towels as their having different places that might require covering. Even more practical, those with long hair often wrap a towel turban-style around it.

Despite being common in Real Life, towels are often played for fanservice. Towels on men will be very low to best show their bare pectorals while women will wear them with Impossibly-Low Neckline to show off cleavage but also have them short on the waist for maximum leg exposure. This also follows the Theiss Titillation Theory, as it will be immediately clear that the towel is the only thing being worn, and it is in constant danger of slipping loose and falling off or be snagged away, a possibility that can be made even more imminent if the wearer makes a sudden movement or reaches for something, usually when surprised or when put in some kind of action sequence. If the towel does slip, the wearer will likely have a Naked Freak-Out and resort to Hand-or-Object Underwear to maintain some measure of modesty/dignity. Often, a towel actually serves as the "Object Underwear" for a character that has been caught while they were bathing. It can also be used in conjunction with Dress Hits Floor (when a character purposefully drops their towel) and Sexy Coat Flashing (when a character opens their towel to flash someone).

Wearing a towel can also be a subtle way of implying intimacy between two people, serving as a form of Sex Dressed. A common situation is a third party assuming the two characters have been intimate upon when finding one of them in a towel, even if the situation is actually innocent.

A common gag is for a character to wear one even when they shouldn't have anything to hide such as a Half-Dressed Cartoon Animal. Another common gag is to show effeminate males wearing their towels in the feminine style. However, as towels are often just worn for practicality, both situations actually make sense. In stark contrast, female characters can wear their towels in the masculine way (or a mock-up of that way, which has one towel around the breasts and another wrapped at the waist, baring the midriff), but this is impractical and does not preserve modesty, so this would pretty much only be for fanservice.

In televised anime, towels are often used to censor scenes like bathing, in which the characters really should be naked. When a towel appears in the localization that wasn't there in the original, it's a form of Digital Bikini. Many Video Games also feature towels as unlockable costumes, sometimes as purely cosmetic outfit, sometimes as an equipable item with actual stats.

See Censor Steam and Censor Suds for another common form of bathtime censorship. Related to the Modesty Bedsheet, with characters wrapping themselves up in a sheet to preserve their modesty in a similar manner, though that trope is far less likely to occur in Real Life.