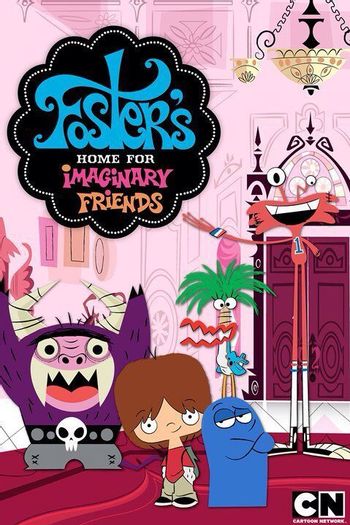 The best friends you could imagine.
After wrapping up four seasons and a feature film for The Powerpuff Girls (1998), Cartoon Network approached Craig McCracken for a new series. He pitched them this simple premise: where do imaginary friends go when their young creators outgrow them?
Advertisement:

Why to Foster's Home for Imaginary Friends, of course! A home for imaginary friends whose kids have outgrown them, Foster's is a place where friends can live together until they are adopted by another child who needs them.

Set In a World… where imaginary friends are living, tangible beings who can be seen and heard by everyone including their creator, Foster's Home For Imaginary Friends follows Mac, a shy and creative 8 year old boy, who is forced by his mother to give up his imaginary friend Bloo, a walking, talking protection blanket. He and Bloo discover the titular home for Bloo to live, but because they don't want to be separated forever, they strike a deal with the house that, as long as Mac comes to visit him every day, Bloo won't be adopted.

Upon arrival, Bloo makes three new friends: Wilt, a tall, basketball-loving monster who Apologizes a Lot; Eduardo, a luchador bull who's afraid of his own shadow; and Coco, a kooky bird/airplane/palmtree creature only capable of saying her own name. As all of the characters are meant to have been dreamed up by children, the house's other residents are a Cast of Snowflakes made up of an array of wildly surreal creatures. Most of the episodes involve Bloo's egotistical, mischievous personality, in complete contrast to the shy, polite Mac, getting him and his friends into wacky hijinks around the house. As with most Cartoon Network shows, expect plenty of parental bonuses along the way.

Of note, Foster's was Cartoon Network's first original 2D animated show to be produced 100% digitally: the backgrounds were all drawn in Photoshop and the animation was done in-house in Adobe Flash, all with the aide of graphics tablets. This not only brought down the cost and shrank the staff, but allowed for the nuances of Craig McCracken's personal drawing style to come through in the final product rather than the blocky, geometric look Flash had been known for up to that point.

A total of 79 episodes in six seasons were produced, along with two Darker and Edgier Made For TV Movies: Good Wilt Hunting in 2006, and Destination Imagination in 2008. The series ran from 2004 to 2009 and, as a result, is seen as the bridge between Cartoon Network's "classic" and "renaissance" periods (coincidentally, it ended the same year as the station's longest-running series, Ed, Edd n Eddy).

In 2012, the series returned to Cartoon Network as a part of Cartoon Planet, although strictly the 11-minute minisodes, since the block doesn't incorporate any 22-minute episodes of former network series. Also as of 2012, reruns began airing on Boomerang. The series is currently streaming on HBO Max.

Not to be confused with The Fosters.