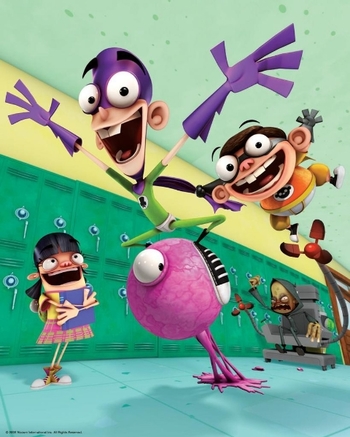 Here we go, 'cause we're Fanboy And Chum Chum, a little coocoo Fanboy And Chum Chum...
"They dress as superheroes, wearing their underwear on the outside for that Superman look. (They have no out-of-costume alter egos.) Their collective mental landscape is littered with the detritus of sci-fi and fantasy, with the stuff of comics and movies, toys and TV shows. But we don't see the world as they imagine it, Walter Mitty-style; we just see them in their world, imagining...and that world is strange enough."
— A Los Angeles Times reviewer
Advertisement:

It all started with a simple idea: two kids wearing superhero costumes and hanging out at a convenience store. A few years later, out of the ashes of Frederator and Nickelodeon's Random! Cartoons comes the squash-and-stretchy CGI world of Fanboy & Chum Chum. The show is about two best friends who live in a water-tower atop of an apartment building with no parental supervision and the strange adventures they have in the town of Galaxy Hills. From turning into vampires, swapping brains with a robot, and taking advantage of slush-machine monster to get through a heat wave, these guys do it all.

Along for the ride are Yo (a Japanese girl with an obsession for digital pets), Kyle (a snarky wizard expelled from his old school, though no one but the titular duo believes him), the Oz (a comic book nerd who lives with his mother), Boog (a bully who works at the local convenience store, but is more interested in playing its arcade game), and Lenny (a sarcastic convenience store employee who hates his job).

The show premiered on November 6, 2009 and it ended after two seasons on November 2, 2012.note One episode, "Brain Freeze," was released on DVD in 2011 but did not air on American TV until July 12, 2014 (almost two years after the show finished). The show's production blog can be found here

Has a Character Sheet in need of some work.