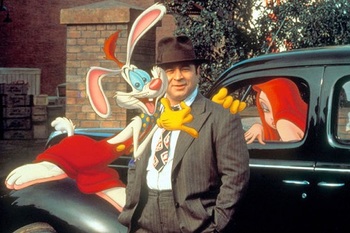 Nope, nothing looney about this!
Roger Rabbit and his cartoon comrades cast real shadows. They shake the hands and grab the coats and rattle the teeth of real actors. They change size and dimension and perspective as they move through a scene...and the cartoon characters look three-dimensional and seem to be occupying real space.
— Roger Ebert, in his review

of Who Framed Roger Rabbit
Advertisement:

If the story is a comedy, and it usually is, the characters tend to be medium-aware and recognize each other as belonging to either category. However, in some early examples like Pete's Dragon, animation is just a special effect and the animated characters are in-universe not different from the actor.

This is one of the oldest special effects in Hollywood (the 1914 animated film, Gertie the Dinosaur, actually had creator Winsor McCay interacting with animated Gertie in real time on a vaudeville stage), and has been done several times with varying degrees of realism, though it was probably perfected by the 1988 Disney/Amblin film, Who Framed Roger Rabbit.

A sub-category of this trope is any story where cartoon characters are real and exist independently from "real" human beings (which may or may not be set in Toon Town and/or an Alternate Tooniverse). Since this is such a visual idea, it's not very common in forms of media that lack a visual aspect, although exceptions exist—including the trope maker itself.

This is mainly a hand-drawn animation trope. While CGI characters are often depicted alongside live-action characters, they are usually depicted as live-action in-universe, and are rarely portrayed as visually or stylistically different from their live-action surroundings. CGI characters, because they have the potential to look more "real" to audiences, are not as prone to this kind of portrayal.

A subtrope of Medium Blending, and an extended version of Rotoscoping. Compare and contrast Serkis Folk and Starring Special Effects. Not to be confused with Live-Action Cartoon, which is about live-action media making use of typical cartoon tropes.

Kit Harington working with Toothless for a new movie.

Kit Harington working with Toothless for a new movie.