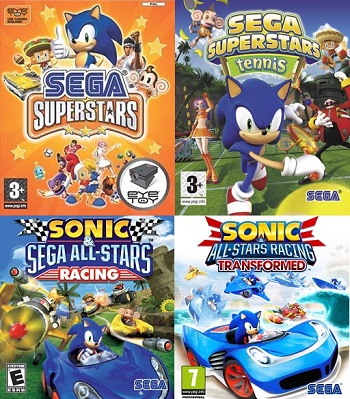 A series of Massive Multiplayer Crossover games, each of a completely different genre, published by Sega and, except for the first one, developed by British company Sumo Digital. As the name implies, they feature a good deal of Sega's major and cult classic franchises.

Sega Superstars: The first one, a 2004 Minigame Game by Sonic Team for the PlayStation 2 EyeToy accessory. It's 12 simple minigames in one, using (as with every other EyeToy game) your body to control them. Descriptions of the minigames are forthcoming.

Also notable is that it isn't a crossover in the proper sense. Each series is sequestered to its own minigame, with no interaction otherwise save for the opening cutscene.

Sega Superstars Tennis: In which Sumo Digital picked up the mantle and followed suit with. Building on their own experience with the Virtua Tennis series, the game is Exactly What It Says on the Tin. Also features a bunch of Sega-themed tennis minigames.

Sonic & Sega All-Stars Racing ("With Banjo-Kazooie" on the Xbox 360 version, at Microsoft's request): Released in February 2010, it can be easily described as "Mario Kart meets Sumo's OutRun games". That is, you get the item-filled Mascot Racer of the former combined with the arcade racing action, handling and speed of the latter.

While All-Stars Racing might be completely shameless about its inspirations, it does its elements so well that, to the surprise of just about everyone, it received a very high amount of praise for that reason alone, joining the likes of Diddy Kong Racing and Crash Team Racing in that regard.

Sonic & All-Stars Racing: Transformed: Dropping the "Sega" from the title (due to the inclusion of more than one Guest Fighter), Sonic & All-Stars Racing: Transformed is the sequel to Sonic & Sega All-Stars Racing, released on Xbox 360, PS3, Wii U, and Vita in late 2012 and on PC and 3DS in early 2013. Featuring a gimmick similar to Mario Kart 7, Sonic and crew's vehicles will now be able to traverse different racing environments, such as water, by having their crafts morph to meet the demand. Disney's Wreck-It Ralph appears as a guest character, presumably in exchange for the Sega cameos in his film.

The series features a large stable of series and games produced by Sega over the years as well as a few guest series. Here are the series represented in at least one of the four games, including those with just mere in-game cameos:
Represented series