Spoilers for all previous Kingdom Hearts games will be left unmarked. You Have Been Warned! 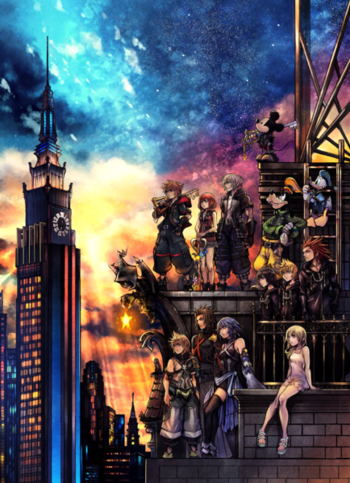 Let me face, let me face, let me face my fears!note Clockwise from top: Mickey Mouse, Donald Duck, and Goofy. Xion, Roxas, and Lea. Naminé. Aqua, Terra, and Ventus. And of course, Sora, Kairi, and Riku.
"They can take your world. They can take your heart. Cut you loose from all you know. But if it's your fate... then every step forward will always be a step closer to home."
Advertisement:

Kingdom Hearts III is an Action RPG for the PlayStation 4 and Xbox One, developed and published by Square Enix. The game is the second Numbered Sequel in Square's long-running Kingdom Hearts franchise, and the eleventh game in total. This game serves as the conclusion of the "Dark Seeker" storyline begun in Kingdom Hearts, but not of the Kingdom Hearts series as a whole.

Believing himself to be protecting an even balance between light and darkness, Master Xehanort sets out to instigate a war between his forces of darkness and the "tyranny of light" that will allow him to take control of Kingdom Hearts and wreak apocalyptic destruction upon the universe. To undermine Xehanort's schemes, two groups set out into the worlds: Riku and King Mickey will investigate the whereabouts of potential allies, while Sora, Donald, and Goofy will seek to revive Sora's power of waking, sabotaged by Xehanort at the end of the previous game, to rescue those allies. Will the light be strong enough to face the darkness when the time for the fated clash arrives?

Kingdom Hearts III returns to the core gameplay of Kingdom Hearts and Kingdom Hearts II: actions selected through a Command Menu with MP-based magic spells, the ability to summon allies, and Donald and Goofy at Sora's side. However, it also integrates elements from the more experimental handheld games. The crowd-controlling Shotlock from Birth by Sleep returns, while Sora's new Formchanges—alternative weapons locked within his Keyblades—are similar to that game's Command Styles. A reworked Flowmotion from Dream Drop Distance allows for freedom of movement. The highly contextual Reaction Commands of II are replaced by less specialized Situation Commands (introduced in 0.2), which can trigger the aforementioned Formchanges, powerful Grand Magic, and Attraction Flow, another new feature that summons spectral amusement park rides. The Gummi Ship mode also returns in an expanded form, featuring exploration on an RPG-esque "overworld" and Pre-existing Encounters.

The game features new worlds based on Tangled, Big Hero 6, Toy Story, Monsters, Inc., and Frozen. Returning worlds include Twilight Town and expansions of the worlds based on Hercules, Pirates of the Caribbean: At World's End and Winnie-the-Pooh.

After many years of anticipation, the game was released on January 25, 2019 in Japan, and on January 29 elsewhere. Critical Mode was released in April 2019 as a free update. A downloadable content pack, titled Re𝄌Mind, was released in January 23, 2020 on the PS4 and February 25, 2020 on the Xbox One, and explains some of the game's story and brings in more bosses and scenarios. The original game (with Re𝄌Mind included), along with the previous installments, became available on Windows PC via the Epic Games Store on March 30, 2021.

In April 29th 2019, a manga adaptation by Shiro Amano was released, despite previous reports of his retirement from the series.

Example of:
Legion of Doom