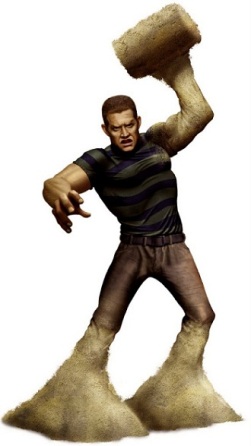 A Voluntary Shapeshifter is never without a weapon, because they are a weapon. When nothing else is within reach, they can form their body or Artificial Limbs into claws, blades, guns, hammers... their arsenal is limited only by their imagination! (And possibly the story's internal logic.) Others who are "limited" to only one alternate shape will use a Partial Transformation to unsheathe their claws (or tentacles!) while still in human form.

Some Shapeshifters use this as their primary Weapon of Choice, while others favor conventional weapons and only reveal this power after being otherwise disarmed.

Could be a Lovecraftian Superpower if it is Squicky enough.

Part of what makes the Shapeshifter Showdown so spectacular. Compare with the Morph Weapon, which has similar powers but isn't part of the wielder's body, and Retractable Weapon. Not to be confused with the Transmogrifier gun. See Equippable Ally for when they still need a little help from an ally to take advantage of this.

Rex has the power to generate weapons out of the nanites in his body.

Rex has the power to generate weapons out of the nanites in his body.