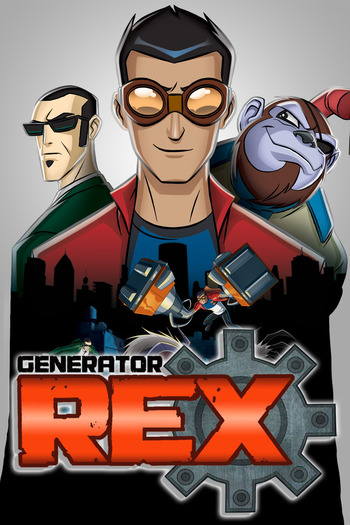 An action/adventure animated series from the creators of Ben 10, Generator Rex was a Cartoon Network series that aired from 2010 to 2013. The series was roughly based on M. Rex, a 1999 two-issue comic published by Image Comics and created by Joe Kelly and Duncan Rouleau. When Man of Action decided to return to this concept and rework it into an animated series, the title had to be changed upon realizing the rights for the original name were still tied up with Image.

The plot focuses on an amnesiac 15-year-old boy named Rex, who gains the ability to produce bio-organic machines from his body due to a global incident known only as "The Event", which caused nanomachines called Nanites to infect every living thing across the planet, causing random mutations. Due to his unique ability to control his nanites and cure others of theirs, Rex is enlisted by the private agency known as Providence, which has tasked itself with the job of protecting civilization from E.V.Os, the term given to those who have mutated.

While working with Providence, Rex aims to uncover his mysterious past, what really happened to cause The Event, and whether or not these two things might be linked; all while occasionally sneaking off to develop some semblance of a normal teenage life. Along the way, Rex is hunted by an evil scientist named Van Kleiss, who has his connections to The Event and is trying to capture and use Rex for his own means. Rex is assisted by his talking chimp and wisecracking E.V.O sidekick, Bobo Haha, and a mysterious Providence agent named Agent Six, who doubles as Rex's guardian.

After three seasons, sixty episodes, and some being Screwed by the Network by way of its final episodes airing at the graveyard slot of 6am, the series concluded with the two-part episode "Endgame".

The show had an intercontinuity crossover episode with Ben 10: Ultimate Alien in 2011 with the one-hour special Ben 10/Generator Rex: Heroes United. Versions of Rex, Bobo, and Six would also appear in another crossover between the two franchises — this time set in the Ben 10 (2016) universe — in 2021.

Has a Character Sheet right this way. And a Recap page here.