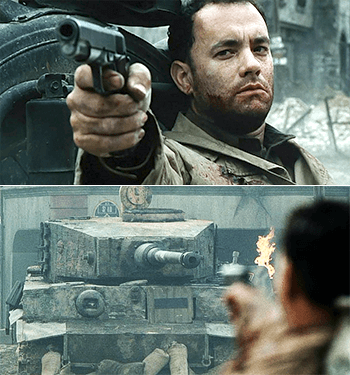 When a character is so fearless or determined that, instead of fleeing, he attacks an overpowering enemy with a laughably underpowered weapon, such as charging a tank with a knife. This is often seen from soldiers (since they usually carry knives in addition to firearms), wherein upon facing an enemy way out of their league and possibly running out of ammo, they pull out their trusty melee Emergency Weapon. This trope is used to demonstrate that the character values whatever they are fighting for higher than their health and survival, since they are willing to bet both for it against overwhelming odds.

Of course, unless The Cavalry enters the fray in that very moment (which it often does), it might very well cue a Dying Moment of Awesome. In some cases, it may lead to an incredible victory instead.

Contrast Never Bring a Knife to a Gun Fight and Never Bring a Knife to a Fist Fight. May be the mark of a Proud Warrior Race Guy or a Determinator of any kind. May take the form of Attack! Attack... Retreat! Retreat! if Played for Laughs. Compare No-Gear Level, when a game forces you to undertake a challenge under or unequipped, and can be done intentionally by gamers as a Self-Imposed Challenge.