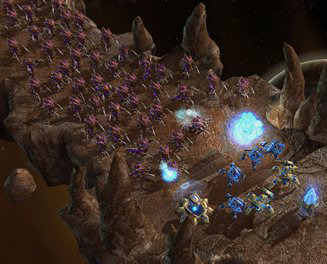 Kekeke
"Hu... well... it's never 'a kobold'.... It's invariably — lots of kobolds."
— Ned the Head, Yet Another Fantasy Gamer Comic
Advertisement:

Defeating a strong opponent with a very large number of disposable combatants. Usually used by the evil side, since their definition of "disposable" will stretch a lot farther.

As an Evil Overlord, it is important to choose your Evil Minions so that this does not apply to your troops, since it usually doesn't work against heroes.

The Trope Namer is the popular real-time strategy game StarCraft; the original meaning of the term was more a form of Sequence Breaking where the Zerg race "rushed" to an attacking unit technology and invaded to take out all the Worker Units of their opponents. It evolved into the current definition by Memetic Mutation.

See also Death of a Thousand Cuts and We Have Reserves. May lead to The War Sequence. Often a component of Hollywood Tactics. Contrast the Elite Army. Sub-Trope of Quantity vs. Quality.