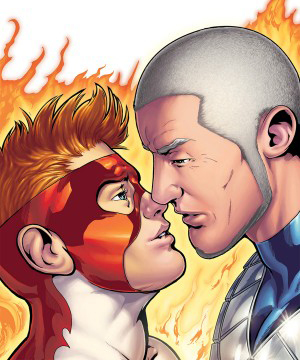 When closeted superhero-in-training Kyle, aka Red Hot, walks into his very first gay bar with a "To hell with it," little does he know how his words will come into play when he exits and runs into the dangerously sexy Annihilator...

The Young Protectors is a multi-chapter superhero webcomic by author Alex Woolfson and artists Adam DeKraker [line artist] and Veronica Gandini [colorist]. It can be found here

. As of February 2020, the comic contains the following arcs:

is available for really NSFW content, as well as comic extras.