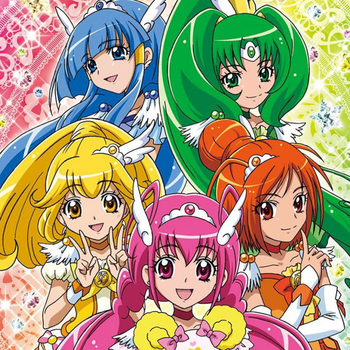 Hair and eyes Color-Coded for Your Convenience.
“Jane, you look blooming, and smiling, and pretty,” said he: “truly pretty this morning. Is this my pale, little elf? Is this my mustard-seed? This little sunny-faced girl with the dimpled cheek and rosy lips; the satin-smooth hazel hair, and the radiant hazel eyes?”
— Jane Eyre, by Charlotte Brontë
Advertisement:

If a character has freaky, cool, or otherwise unusual hair colors, their eyes are liable to match. "Unusual", of course, needs to be taken with a grain of salt when it comes to Anime Hair. Comic books and western animation are also likely to display this trope.

Some series use this to make a character stand out as being "weird" or "different", especially if it's an uncommon color. Others use this for their entire cast.