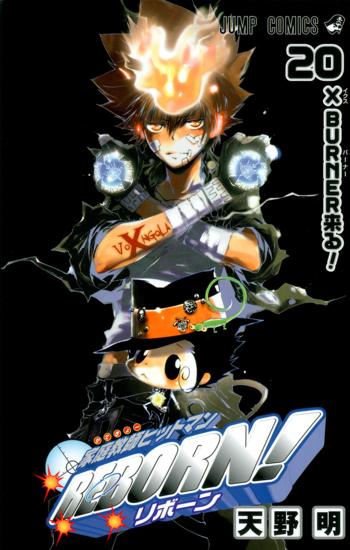 Katekyō Hitman Reborn! (lit. "Tutor Hitman Reborn"), simply retitled to Reborn! in Viz Media's English translation, is a shonen manga written and illustrated by Akira Amano, which was serialized in Weekly Shonen Jump from 2004 to 2012.

The series follows the story of Junior High student, Tsunayoshi "Tsuna" Sawada, who is generally considered a loser by all of his peers; receiving terrible grades, being inept at sports, clumsy to a fault, and generally disliked by the populace of his school. That all changes after coming home from school one day to find a gun-toting baby hitman named Reborn, who explains that he is next in line to become boss of the world's strongest mafia family, the Vongola, and will be serving as his home tutor to train him to become the boss.

Initially, Tsuna is in disbelief, but after Reborn shoots him in the head with a bullet that only temporarily kills him, he is brought back to life with all the limiters of his body removed, gaining the ability to perform amazing feats and carrying out his Dying Will.

However, the life of a mafia boss is fraught with danger, and Tsuna and his new mafia "family" must become stronger if they are to survive the competition.

An anime adaptation by Artland began airing in October 7, 2006 and ended September 25, 2010. The anime is available free and legally with English subtitles at Crunchyroll

but only in certain areas. Discotek Media has also licensed the series in North America and, in September 2018, released the first 101 episodes on Blu-ray.

Marvelous! announced that a stage play adaptation titled Katekyo Hitman Reborn! The STAGE was scheduled to be performed on September 21 to October 6, 2018, at Tokyo and Osaka, which covered the Daily Life and the Kokuyo arcs and saw to NEEKO reprising her role as Reborn. After a successful run, a second stage play titled Katekyo Hitman Reborn! the STAGE vs VARIA was announced for a two part run. The first Part ran June 14 to June 23, 2019.