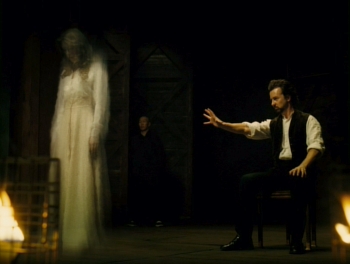 Prepare for what is not there.
"Then I shall make you see... that your hopes are nothing—nothing but a mere illusion!"
— Zexion, Kingdom Hearts: Chain of Memories
Advertisement:

Most villains (and the occasional hero, but this is largely a villain power), if given the chance, will employ magic or mechanisms to confuse their enemies and render them vulnerable, but a Master of Illusion will go beyond merely using such trickery as a tool. Instead, they will hone it into a fine art form; milking it for as much trickery, espionage, and/or personal pleasure as they can derive from it.

Such powers are usually psychic in origin, although they can also be technological as well, creating Holograms which can be especially dangerous when they can make them solid (holograms also carry the bonus of being able to fool electronic surveillance). Despite lacking obvious means of attack like with Pyrokinesis and Telekinesis, they can use a Faux Flame to burn, though resolute heroes may resist, or making a gaping hole seem like an even floor. A common variant is for the Master of Illusion to trap the hero in a virtual reality simulation over which the villain has complete control. Of course, death or injury in the simulation will usually mean death or injury in real life, so any hero thus ensnared will have to be careful. Most Masters of Illusion aren't content to just let their VR deathtrap program play out by itself - what would be the fun in that after all? So they'll frequently appear in the simulation, usually as a cackling, monstrous tormentor who plays cat and mouse games with the hero and who mocks their every step. If the Master of Illusion traps a hero in a Lotus-Eater Machine,—or in a simulation of their ordinary, everyday life—they'll frequently appear as an ally of the hero, using this form to distract the hero from discovering their true whereabouts, or as part of a ruse to trick the hero into revealing some important confidential information.

Masters of Illusion really needn't bother with such elaborate setups. It would be easy enough, after all, to trick an enemy into killing himself: use some variant of the "This Is Not a Floor" trick; destroy a spaceship by having its crewmembers press the wrong buttons and steer it into the nearest star; kill the heroes by having them confuse each other for enemies and fatally attack each other.. But again, what would be the fun in doing something as simple as that? Masters of Illusion, having Trickster personalities by the very nature of their powers, will usually not be able to resist playing with their prey. Of course, this could—and usually does - give the heroes the time and/or chance to think up a way to counter the Master of Illusion's powers, or leave clues that they are in an illusion in the first place, such as a Blank Book. Once the villain is destroyed, the world they create usually dissolves into nothingness - provided the defeat or death of the Master of Illusion wasn't part of the illusion itself...

And really, as a hero... how would you know? Could you ever really be sure that you defeated the Master of Illusion and escaped? Why is Schrödinger's Butterfly flapping nearby?

On that note, sometimes even a "mundane" Master of Illusion will be able to make their projections "solid" or "real" in some sense, which as noted effectively makes them the budget version of the Reality Warper. These abilities will usually come with limitations however, most often No Ontological Inertia for the created constructs, a greater fragility than the constructs realistically would have (to physical force or especially disbelief), and/or some limits on what can be made real (Belief might make a sword wound or a Faux Flame Fireball as deadly as they seem, but unless you're in a cartoon world, forget about an illusory bridge fooling gravity or a tunnel overcoming the Pauli Exclusion Principle

Note: This trope doesn't apply to villains who occasionally employ illusory tricks to ensnare enemies. The Master of Illusion is a specialist in generating manipulative hallucinations, and will usually possess no other powers apart from that. (Although when you have the ability to trick the Mighty Glacier into thinking that his 6-foot long claymore is a flyswatter and that a poisonous mosquito has just landed on the back of his buddy's neck, who needs other powers?)

See also Lotus-Eater Machine, Masquerade, The Treachery of Images, I Know What You Fear, Cold Flames and Shapeshifting Seducer. Compare Glamour. Not to be confused with Mickey Mouse's games, or the thirteenth Pokémon movie, even if the main Pokémon is herself an example of this trope.

For the other type of Master of Illusions, the folks who perform to entertain audiences, see Stage Magician (though it's not at all rare for the two tropes to overlap).