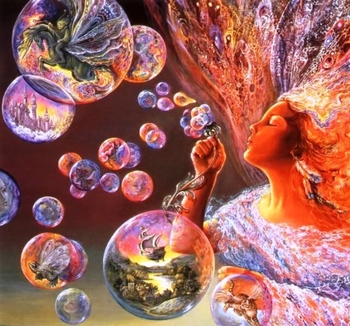 Sometimes there's someone who can shape his dreams into whatever he wants — or shape your dreams, for that matter. They can send you into Your Worst Nightmare. They can trap you in a Dream Within a Dream, or help you resolve something in a Vision Quest. They can even kill you in your dreams. They can be villains or heroes, but dreams are their domain. They are a Dream Weaver.

Sometimes they can give prophetic dreams. Sometimes a means of communication. Those who bring their dreams into the physical world are either Masters Of Illusion or Reality Warpers, depending on whether they actually change things or just make it look like so. Sometimes, they can even trap more than one person in the same dream.

May only be able to affect sleeping subjects, unless they can also induce and maintain sleep in others. Compare Dream Walker, contrast Dream Stealer. Nightmare Weaver is a Sub-Trope for those who only bring ill tidings and ill will to you.

Not to be confused with the web development application by Adobe Systems.

...Ooh, Dream Weaver, I believe you can get me through the night...