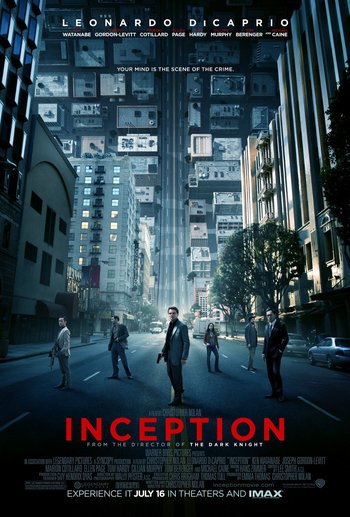 "What's the most resilient parasite? A bacteria? A virus? An intestinal worm? [...] An idea. Resilient, highly contagious. Once an idea has taken hold in the brain, it's almost impossible to eradicate. An idea that is fully formed, fully understood? That sticks."
— Dominic Cobb
Advertisement:

Inception is a 2010 science-fiction thriller from director Christopher Nolan. It works like a "reverse-heist film": instead of taking something from the target, the main character's team must leave something behind. It features an All-Star Cast consisting of Leonardo DiCaprio, Joseph Gordon-Levitt, Elliot Page, Tom Hardy, Marion Cotillard, Cillian Murphy, Michael Caine and Ken Watanabe.

Dominic "Dom" Cobb (DiCaprio) works as a freelance "extractor": using a specialized set of drugs, Cobb and his team share dreams with their targets (usually individuals with lots of power and money), which allows Cobb to find and open the safes and vaults within said dreams that contain secrets he can sell to his clients. Cobb's skills in understanding the human mind make him one of the world's best extractors, but his job has turned him into an international fugitive who can't return home to his family in the United States. When an attempt to extract information from a Japanese business magnate named Saito (Watanabe) goes wrong, Cobb goes on the run from his current employers.

Saito catches up with Cobb and makes the extractor an offer: he'll arrange to wipe Cobb's criminal record (which would allow him to go home) if Cobb can manage to perform an inception on one of Saito's rivals. Whereas extraction involves stealing ideas or information already in somebody's head, inception involves the insertion of an idea into someone's head in a way which convinces the target that they independently conceived the idea. Cobb accepts Saito's proposal, even though he knows it has a catch: nobody has ever pulled off a successful inception, as the targets always realize that they didn't come up with the inserted idea.

To attempt the impossible, Cobb assembles a Badass Crew of experts: longtime extraction partner Arthur (Gordon-Levitt), dreamworld-building architect Ariadne (Page), expert forger Eames (Hardy), and chemist Yusuf (who devises the specialized sedatives that make extraction possible). The task requires them to perform a very risky "dream within a dream within a dream" scenario which will allow the team to bury the idea deep enough to leave no trace of their influence. As Cobb's group works their way into the target's mind, a complication Cobb failed to warn them about arises: inside the dream world, Cobb's subconscious demons makes for a worse enemy than their target's subconscious security — and if they die in the dream? Well, the sedatives can assure that they simply don't wake up...

Inception extracted the following tropes from the minds of humanity:

open/close all folders
#-G
H-M
N-S
T-Z
How did you get here? Where are you right now?
Feedback