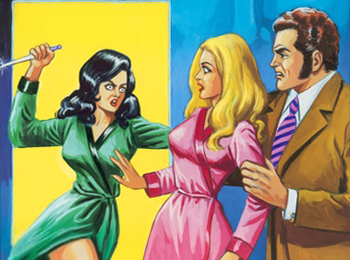 "Heav'n has no rage, like love to hatred turn'd,
Nor Hell a fury, like a woman scorn'd."
— William Congreve, The Mourning Bride (1697)
Advertisement:

What's the only type of woman more dangerous than a Mama Bear? A woman who's been dumped, cheated on, or otherwise done wrong by her significant other (or, in some cases, merely thinks she's been). Especially if she's been hiding some sanity problems, and especially if she was a Clingy Jealous Girl. Otherwise Self-Explanatory.

A villainess — particularly a queen — may react in this manner when she has very little claim on the other person. After all, It's All About Me. If the woman in question is part of an evil organisation, this may be her cue to pull a High-Heel–Face Turn.

Not to be confused with the Psycho Ex-Girlfriend, although the chances of overlap are ideal. When a character is killed by said Woman Scorned, it's... well... Death by Woman Scorned, which crosses over with If I Can't Have You….