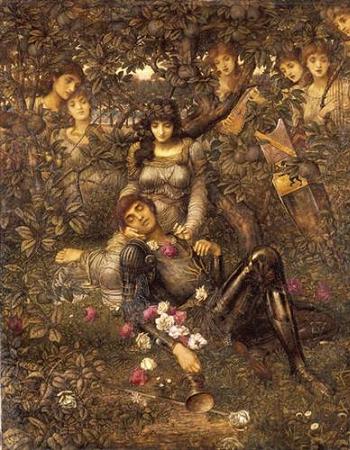 Just your typical collection of tales about a Magical Land full of Knights in Shining Armor, the evil knights and monsters they fight, and the beautiful maidens they love. Except half the knights are total newbies who have no idea what they're doing, the monsters are personifications of sins, and the maiden is just as likely as her boyfriend to be a warrior who has to bail him out of trouble.

Maybe it's not so typical after all...

The Faerie Queene is a collection of 6 epic poems (and the few incomplete Mutabilitie Cantos) written by Edmund Spenser as a gift for Queen Elizabeth. The first three books were published in 1590 and the next 3 in 1596. As outlined in a letter to his friend Sir Walter Raleigh, Spenser's plan was to write 24 books — the first 12 each starring a knight who personifies one of the 12 Private Virtues, and the rest starring the Public Domain Character Prince Arthur, who personifies the 12 Public Virtues — ending with an epic battle against the Faerie Queene's Arch-Enemy the Paynim King and her marriage to Arthur. Unfortunately, Spenser Died During Production; thus, we never meet the Faerie Queene in person, and Prince Arthur is never united with his True Love.

Gloriana, the Queen of Faerieland, an obvious and flattering Expy of Queen Elizabeth, dwells in the magnificent royal city of Cleopolis where she runs the local Heroes "R" Us, the Knights of Maidenhead. The Knights are human beings who were Switched at Birth with Changelings (a supposedly favorite prank of The Fair Folk in those days) and serve the Faerie Queene in hopes of attaining honor and glory. The pattern of most of the stories is: a nearby kingdom is being terrorized by some threat, someone comes to Cleopolis to plead for aid, the queen sends a Knight to help them, the Knight and his companion go on a journey full of obstacles relevant to the virtue the Knight represents, the Knight defeats the villain. On the way, they eventually run into Prince Arthur, who fell in love with the Faerie Queene after seeing her in a dream. He is on his way to find her but keeps getting sidetracked by needing to help every character he meets along the way.

The poems are strong Christian allegory full of symbolism and British legend. It was Spenser's first epic, a departure from the pastoral poetry he specialized in. It is widely studied in college English classes and a highly interesting read. Don't let the archaic language frighten you.

By far the most famous story is that of Saint George and his slaying of the dragon, re-told here in the eleventh canto of Book I.

The entire series contains examples of:

The Book of Chastity breaks away from Spenser's pattern. Britomart is a British princess who has come to Faerieland disguised as a male knight on a personal mission to find Artegall. Book Three also introduces the by-plots of Belphoebe's romance with Arthur's squire, Timias, and the woes of Florimell, a Damsel in Distress who is always on the run because everywhere she turns, she finds another man trying to rape her, until she is captured by the sea god Proteus and thrown in his dungeon for refusing to sleep with him.

Book 4
Book Four
Book Four is a Continuation of Book Three. Britomart finds Artegall, Florimell is released from her dungeon and engaged to Marinell, but first Satyrane invites all the knights in the land to a tournament and beauty contest. The prizes for the winning knight and the most beautiful girl will be... each other! Entering the tournament are best friends and brothers-in-law (they married each other's sister) Campbell and Triamond from one of Geoffrey Chaucer's The Canterbury Tales, "The Squire's Tale," another series cut short by Died During Production. Britomart, still in disguise as the Knight of the Ebon Spear, wins the tournament, and enters Amoret in the beauty contest. The judges decide the "Snowy Florimell" (a clone of Florimell a witch made for her son) is the most beautiful girl, but she fails the final test: the real Florimell's golden girdle, which can only be worn by a virgin, won't fit her. In fact, it won't fit anyone but Amoret, which Britomart argues makes her the most beautiful. But the value of virginity and true love is the main point of Book Three. The Virtue of Book Four is Friendship, personified in Campbell's and Triamond's friendship and Britomart's and Amoret's (once Amoret realizes her rescuer is not a man who is keeping her near him to take advantage of her).

In the middle of the book, Artegall loses a duel to the evil Amazon queen Radigund because he refuses to finish her off when he has the chance because of her beauty. When she imprisons him, it's not the famous Arthur who comes to his rescue but Britomart.

Calidore disappears from the radar for a good chunk of the action while the story follows Calepine, his girlfriend Serena, Arthur, Timias (who has regained the will to live and fight after being reconciled with Belphoebe), and their encounters with the Blatant Beast, whose bites cannot be healed and work like rumors, cursing the victims with bad reputations.