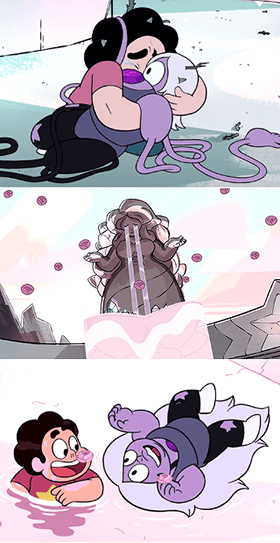 As the title might suggest, a Healing Spring is a fountain, spring, or other body of water that has some magical healing properties.

Overwhelmingly common in video games. Usually, characters will be able to quickly recover their health simply by immersing themselves in it. Often they can also bottle it and take it with them to drink and heal themselves later.

Although the water may look exactly like normal water, it may also be sparkly, be a weird color, or have some other aesthetic quality that marks it as magical.

It's also common for a healing spring to inhabit a goddess, a fairy, a spirit, or some other magical being.

Rarely is it ever explained how the particular body of water gained its healing properties. In a lot of cases, it can be assumed that it was the work of the being that resides in it, or A Wizard Did It. Or the water is just so ridiculously "clean and pure" that it can heal the wounded back to perfect health. Depending on the cause of its abilities, the water may be an example of Revive Kills Zombie.

In the cases of healing springs that are fed by rivers or waterfalls, it also isn't explained how the water suddenly gains its magic healing powers as soon as it flows into the vicinity of the spring. Some video game designers avoid this problem altogether by simply having springs that have no inflow whatsoever. With healing fountains, it can be usually be assumed that the same water is simply cycled through the plumbing indefinitely, also avoiding this problem.

If the Healing Spring is also a Save Point, that's a form of Healing Checkpoint.

A Fountain of Youth often does this as a side-effect. Subtrope of Heal It with Water, which is for when water in general is associated with healing. Evil characters may use a Blood Bath for the same effect.

The spring heals Mario and puts the pieces of Bowser Jr back together.

The spring heals Mario and puts the pieces of Bowser Jr back together.