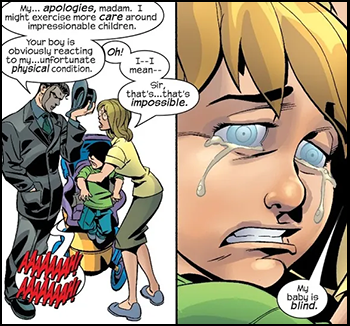 Even though, as far as we know, babies are generally not considered as smart as children or adults, in fiction there is one thing that they can often infallibly sense: pure evil. If a baby is in the room when something bad happens, it will almost always start crying, even though there's no way it can know what's going on. As another often-used example, when the baby is picked up by a villain, it will automatically start crying regardless of whether the villain has done something to it or even looks scary. Makes a little more sense in cases where the villain in question is known to eat babies, though not much, given that the baby isn't terribly likely to be aware of that.
Advertisement:

A sister trope to Evil-Detecting Dog, and a sub-trope of Children Are Innocent and Excellent Judge of Character. If an infant detects as evil, they may be an Enfant Terrible.