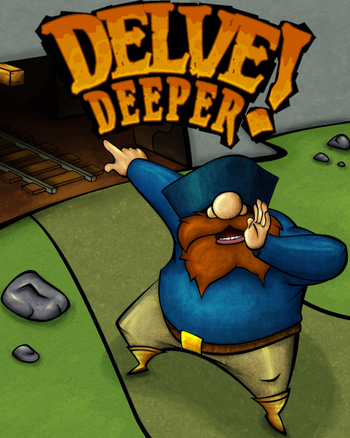 Delve Deeper is a 2D strategy game made by Lunar Giant, released in 2010.
Advertisement:

In the game, you control a team of 5 dwarves who are ordered by their king to find treasures. Players choose one of three classes for each team member (Miners who have average stats but a high carrying capacity, Fighters who have low movement but high attack power and health, and Scouts who have high movement but low health and attack power), then compete with up to 3 other teams to gather the most wealth in a set number of turns. This is made more difficult by the Goblins, dragons, slimes and other creatures that infest the mining site.

The game is turn based, with players taking turns with expanding their mines, moving dwarves, fighting and mining. All this while their king provides his comments on situation.

The game is available via several Digital Distribution carriers, including Steam