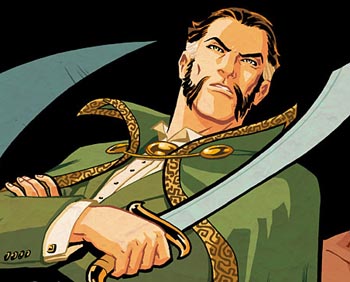 Probably the biggest threat to the world in Batman's Rogues Gallery, Ra's al Ghul (Arabic for "The Demon's Head", and pronounced "Raysh Al-Ghool" or "Rahz Al-Ghool" depending on the adaptation) is a centuries-old man who leads an enormous international terrorist organization known as DEMON (as well as the League of Assassins). Unlike most of the other Bat-rogues, he is actually quite cultured and polite, if ruthless, and genuinely believes his goals to be noble. Of course, since his goal is to "purify" the world by killing off ninety percent of its population, Batman disagrees.

Being an intelligent and Wicked Cultured man, Ra's Al-Ghul takes some cues from the James Bond villains popular at the time. He first appeared in 1971 but took much of the 1980s "off", rarely appearing as a Batman antagonist, before being revived in a big way for the 1990s.

Ra's is second only to The Joker in Batman's Rogues Gallery, and is a more straightforward Evil Counterpart to the Dark Knight. Like Batman, Ra's has wealth, skills, charisma, intelligence, and cutting-edge-technology, but unlike Batman, he also has the League of Assassins, an entire shadow organization at his beck and call which follows him like a devoted cult. Ra's' ultimate goal is to stop the slow death of the planet Earth... by wiping out most of humanity. In its place, he plans to build a new society which will be overall superior.

Ra's is nearly immortal—he is literally Really 700 Years Old. His life is extended by repeated usage of the Lazarus Pit, a mystical spring which can retard the aging process, heal virtually any wound, and even bring back the dead (though this does have the side effect of temporarily driving the subject insane). Such a practice has allowed him to live centuries, if not millennia, and he's taken advantage of such a long lifespan to master swordsmanship, war strategies, various fighting styles, and many other skills. However, repeated use of the Pit has made him addicted, and he has grown more and more reliant upon it as his time grows short. Which brings us to our next point...

The next thing Ra's is most famous for is his beautiful daughter, Talia al Ghul. After Catwoman, Talia is Bruce's second great love. And like Catwoman, being on opposite sides keeps them apart. Talia is often conflicted by her loyalty to her father and her love for Batman. She will often pick one over the other, only to change her mind again later.

Ra's has come to blows with both Batman and the rest of the Justice League of America many times, one time unleashing a genetically engineered virus on Gotham, and on another occasion, taking down most of the JLA with Batman's contingency files. He himself, however, was killed by one of his daughters, also a user of the Lazarus Pits, who was furious at him for leaving her to die at a Nazi Concentration Camp. Though he eventually returned to life, Batman was able to imprison him in Arkham Asylum under the guise of an inmate named Terry Gene Kase, and assigns him "medication" that keeps him highly sedated.