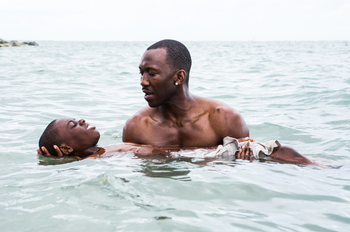 "Young I was, and vain, but the sea washed my follies and my vanities away. That man drowned, nephew. His lungs filled with seawater, and the fish ate the scales off his eyes. When I rose again, I saw clearly."
— Aeron Greyjoy, A Feast for Crows
Advertisement:

Baptism, either literally or figuratively.

A common sacrament among strains of Christianity is baptism

, where a person is either immersed or washed in water as part of their initiation into the Church. The person is thus washed "clean" of their past sins, and is ready to begin a new life as a Christian. Some sects, most prominently the Baptists, view baptism itself as symbolic; not a ritual to "wash off" sin with holy water, but a picture of and public identification with Jesus's death, burial, and resurrection through which the actual forgiveness has already taken place.

In fiction, "symbolic" baptism can be a sign of Character Development, where swimming or watery immersion marks a major turning point in the characters' life. Most commonly, it marks the point where the character begins to let go of the past, or is initiated into a new phase of their life. Sometimes such scenes are a Near-Death Experience with the character almost drowning, reinforcing the notion of spiritual rebirth.

Sister Trope to Redemption in the Rain and Important Haircut. May involve Symbolic Serene Submersion.