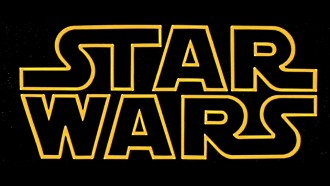 Are you hearing the Fanfare just looking at this? If not, then you should.

"A long time ago in a galaxy far, far away...."
Advertisement:

is a long-running Space Opera mega-franchise. Originally created in 1977 by George Lucas, produced by Lucasfilm and distributed by 20th Century Fox, it is currently owned by Disney since the acquisition of Lucasfilm in 2012, with Lucasfilm president Kathleen Kennedy serving as a producer for all films released under the Disney banner.

The franchise takes place in an ancient, faraway galaxy: a Science Fantasy universe where robots and starships exist alongside mystical sages who draw their powers from a mysterious life-energy known as "the Force". While the franchise's full timeline spans thousands of years of history, the majority of the stories within it are focused on two main conflicts: the rise and fall of the tyrannical Galactic Empire, and the spiritual battle between the "Light" and "Dark" sides of the Force, represented by the noble Warrior Monks of the Jedi Order and the Evil Sorcerers of the Sith Order. And the films that make up the main "Episodes" are known as the "Skywalker Saga", centering on the Skywalker family and their travails in the midst of the two aforementioned conflicts.

Since its inception, Star Wars has grown into one of the most well-known franchises in pop-culture history (to wit, it is the most cited franchise on this very site). Though many tropes did not originate with Star Wars, it has popularized dozens of them, to the point numerous modern Space Opera and Sci-Fi works wouldn't look the same without it and contain homages to the franchise. This site also has made the franchise a Trope Namer for fifty odd tropes, listed here.

The Expanded Universe was always immense, encompassing everything from the silver screen to animation, video games, books, comics, and much more. The internal consistency of this was handled at a high level, with various canon tiers depending relative to the works developed personally by Lucas. Following the Disney acquisition, Lucasfilm initiated a Continuity Reboot of the franchise on April 25, 2014; the six films and Star Wars: The Clone Wars were catalogued and held as the basis of the official Star Wars continuity from then on while all of the other previous works here

were declared non-canon and branded as Star Wars Legends. Unless otherwise stated, any works created since then are part of a singular continuity.

Due to the Anachronic Order nature of the franchise, a chronological order of all works can be found here.

The Star Wars franchise includes thousands of works including and beyond the main films in the Skywalker Saga. See Star Wars Legends for works that exist within the Legends continuity.

Skywalker Saga films
The three trilogies, or "trilogy of trilogies", that make up the Skywalker Saga, which follows the eponymous Force-sensitive family as they and the people they meet change the course of the galaxy over many decades.The Original TrilogyThe Prequel TrilogyThe Sequel Trilogy
Spin-off films
Films that are set outside of the main Skywalker Saga, which include anthologies and upcoming projects such as Patty Jenkins's Rogue Squadron movie and a movie developed and produced by Kevin Feige.A Star Wars Story anthology seriesOther films officially in development
Projects in development
Cancelled projects
Television series
Live-action TV series

May the Tropes be with us:

All spoilers for the Skywalker Saga will be left unmarked. You Have Been Warned!

open/close all folders
#-H
I-Q
R-Z
"The Force will be with you -- always."
Feedback