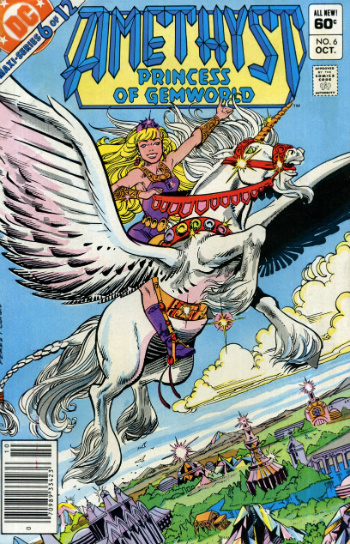 Yes, she had a winged unicorn too.
Advertisement:

Amethyst, Princess of Gemworld was a comic book series about a little girl who discovers that she is really the ruler of a magical world, and must return there to defeat the tyrant who now rules it.

Amethyst began as a 12-issue maxi-series by writers Dan Mishkin and Gary Cohn and artist Ernie Colón in 1983. It proved popular enough that it was given its own regular series that lasted until 1985. Despite several similarities, Amethyst predates both She-Ra: Princess of Power and Sailor Moon.

In the story, Amy Winston was a normal 13-year-old girl who was one day taken to the Gemworld, situated in another dimension. There she finds out that she is actually Princess Amethyst, daughter of the rightful rulers of that land. However her parents were killed by the evil Dark Opal when she was a baby, and she only survived because their servant, Citrina, brought her to Earth, where she was adopted by the Winstons. Due to the way time works on Gemworld, Amy finds herself transformed into a 20-year-old woman while there, and the rebellion fighting against Opal's rule wants her to lead them. Amy thus finds herself splitting her time between her normal life on Earth and her secret adventures on the Gemworld.

Other characters in the series include: the two Princesses Emerald, who become Amy's best friends; the handsome Prince Topaz, whom Amethyst falls in love with; Lady Turquoise, an ally who also becomes a rival for Topaz's feelings, and Carnelian, Dark Opal's "son" who turns out to be a boy from Earth raised on Gemworld. (Like Amy, he reverts to his true age on Earth.) Despite the fairy tale trappings, Amethyst was an action/fantasy series, and some characters actually die in battle. Still, Amethyst's forces triumph in the end and Opal is killed.

In the regular series, Amy goes back to living on Earth but continues to have adventures on Gemworld. The Love Triangle was eventually resolved in Turquoise's favor, probably to avoid the issue of Amy's relationship with a much older boy.

After the original creators left, it was decided by DC to boost Amethyst's sales by tying her to the rest of The DCU, in particular the war between the Lords of Order and Chaos, which was a major plotline at the time. But the new stories, written by Keith Giffen and Mindy Newell, shifted entirely from fantasy adventure to horror. Amethyst was blinded; found out that she was actually the product of an illicit affair between a Lord of Order and her mother; several characters met horrible deaths (in particular, Carnelian's was pure horror) and ultimately, Amethyst is forced to merge with a Lord of Chaos in order to save the Gemworld. The series was then, very unsurprisingly cancelled.

Amethyst has since then made a few reappearances, but they have been very inconsistent. In one story, she was now a villain, who tried to conquer the Gemworld herself. More recently, during the Infinite Crisis Crisis Crossover, she was seen again, with no explanations of her current status.

Note: Another story established that the Gemworld would one day enter our universe, becoming Zerox, the "Sorcerers' World" from Legion of Super-Heroes mythos.

It should also be noted that, since she was the only Lord of Order to survive Infinite Crisis (with all but one of the Lords of Chaos also dying), Amethyst was consequently one of the two most powerful magic-users in the DCU.

Amethyst was initially the main feature in Sword of Sorcery, a New 52 anthology comic series that launched in September 2012. This version started things over from scratch with 17-year-old Amy learning her true identity for the first time after a life on the road with her mother. This was significantly Darker and Edgier than previous versions of the character, inspired by Game of Thrones; her first action scene had her saving a girl from being raped. The series only lasted eight issues. After a short hiatus in comic limbo, she made her grand return in Young Justice (2019) as part of Brian Michael Bendis' new Wonder Comics imprint with a new title by writer/artist Amy Reeder, launched in February 2020. Bendis' take seems to happily borrow from all the previous ones as it sees fit and establishes that Gemworld undergoes serious change every time The Multiverse of DC undergoes a crisis, with inhabitants being at least aware that such thing has already happened seven times.

The series gained some fame when animated shorts based on Amethyst were added to the DC Nation block on Cartoon Network. See that trope page for more info. As far as animated adaptations go, Amethyst is also slated to show up in DC Super Hero Girls.

Not to be confused with Amethyst of the Crystal Gems (though both are TimeWarner properties).

Tropes in the Amethyst comics:

Tropes in the Sword of Sorcery comic

Tropes in the Wonder Comics' incarnation