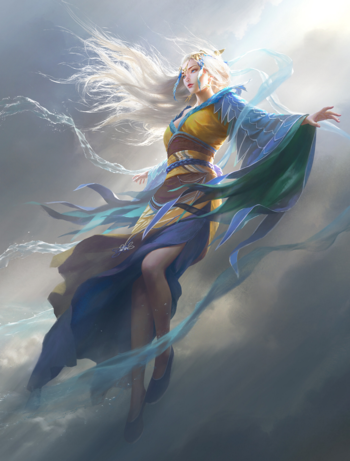 In fiction, white locks on a young character mark them as mystical and arcane, whether it means they are outright magical or not. In sci-fi and fantasy, it's often the only non-human hair color you will see on new species or race of people, especially in elves or Human Aliens. It is a common mark of a Mysterious Waif and a Mystical Waif.

The popularity of this trope probably stems from its status as a borderline-natural hair color: white hair on a young person strikes that delicate balance of being unusual but not blatantly unrealistic. The color also lends itself well to symbolism.

It bears repeating that these are young (or at least young-looking) characters and their hair color is not indicative of age (or of premature aging).

May also come with an Ethereal White Dress.

See also White Hair, Black Heart, which is where having white hair is a sign of evil instead of magic, superpowers, or otherworldly origins; an albino power's white hair being seen as a sign of evil or the supernatural may be indicative of Albinos Are Freaks. If a character's hair turns white due to a disease or illness, it's Disease Bleach. If a character's hair turns white when they use their powers, it's Power Dyes Your Hair. Sometimes can be a result of Locked into Strangeness. See also Bald Mystic, another hairstyling choice that denotes the supernatural.