Western Animation / The Legend of Tarzan 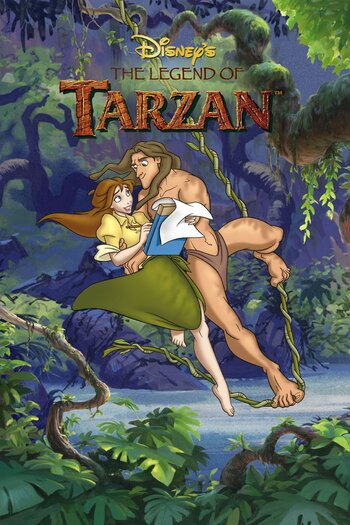 The Legend of Tarzan (September 3, 2001 — February 5, 2003) is a spin-off TV series to Disney's Tarzan, which aired on UPN's Disney's One Too block. It takes place after the events of the film; Jane and Tarzan live in the jungle as husband and wife, along with his gorilla troop and her scientist father. The three humans now reside in the treehouse built by Tarzan's parents. They encounter all sort of perils, from wild animals to natural disasters to various people visiting the jungle.

It adapted several characters and locations from other original Tarzan books and Edgar Rice Burroughs material like Queen La and the Lost City of Opar, and the hidden dinosaur world of Pellucidar. An episode even brought Burroughs himself into the action.

Not to be confused with the 2016 live-action Tarzan movie.