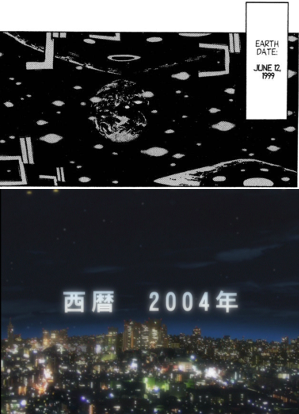 "Planet Earth, 200... Uh... 9."
"The '90s saw a wave of middle-brow adaptations of The Bard's plays, often taking them to new and interesting territory. There was Henry IV with rent boys, a Fascist Richard III, The Taming of the Shrew in High School, Hamlet with lions, Romeo and Juliet with seizures..."
— Kyle Kallgren, while reviewing another Shakespeare update, Tromeo and Julietnote and referring to, respectively: My Own Private Idaho, Richard III, 10 Things I Hate About You, The Lion King, and William Shakespeare's Romeo + Juliet
Advertisement:

Adaptations and Remakes of old stories will frequently move them closer to the production in time, space or both, even if the original is only a couple of decades old, in a Derivative Works kind of Creator Provincialism.

Distinct from Recycled IN SPACE! in that the purpose is to make the story more familiar and accessible (as well as cutting production costs), whereas that trope is often based around transplanting a story into a less familiar setting. Also, by its nature, a Setting Update is typically made long after the original, whereas a Recycled Premise is usually a copy made to cash in on hot demand. Sometimes, especially with the more radical changes, it can be a genuinely clever analogy.

Please do not describe examples in the Recycled IN SPACE! style. That is a Zero-Context Example, and zero context examples are not allowed on the Wiki.

Related to Comic-Book Time for long running series. Also related to Retcon. Compare Adaptational Location Change. Contrast Revival which continues the story with updated elements. Super-Trope to Modern A.U. Fic, which is a sub-trope of this applied to fan-works. Attempted aversion of this trope sometimes results in Present-Day Past anyway.