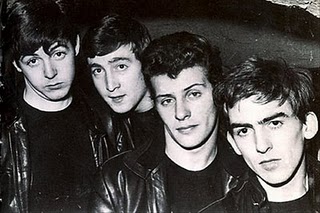 The Fab Four: Paul, John, Pete, and George...wait, Pete?!
"People get kicked out of bands. It happens. The Beatles nixed Pete Best because Ringo Starr was a superior drummer. Metallica got rid of Dave Mustaine because only two exceptionally low IQ rageaholic jackasses are allowed in a band and they already had James Hetfield and Lars Ulrich." caption:  Actually, Lars counts as two.
— Cracked, "5 Absurd Reasons Musicians Have Been Fired from Famous Bands"

A subtrope of Suspiciously Similar Substitute and/or The Other Darrin, wherein one actor is in a role or position, then is dropped (or leaves voluntarily) for another actor who is the one everyone remembers after the work/group becomes famous.

Named for Pete Best, the first drummer of The Beatles, who was replaced by Ringo Starr just before they hit it big, with Ringo having suddenly become available after leaving another band.

Less likely in the film industry (since you can only get one actor to play a role, any replacement will have to reshoot the scenes and become The Other Marty), more likely in theater, television, and music.

If the guy is in the band when they are famous, but all but forgotten, that person's Stuck in Their Shadow. If the guy never had a chance of becoming famous anyway, that's Breakup Breakout. If the band tries to avoid talking about the guy in the event he is brought up or tries to take down any uploaded footage of the period he was with them, he is an Old Shame. If their successor ends up more remembered, it is a case of More Popular Replacement.

As a final thought, notice that in Real Life this trope is quite common since music groups or any team whose future success is not clear normally go through a series of line-up changes.

Alternative Title(s): Left Before They Got Famous, Replaced And Forgotten