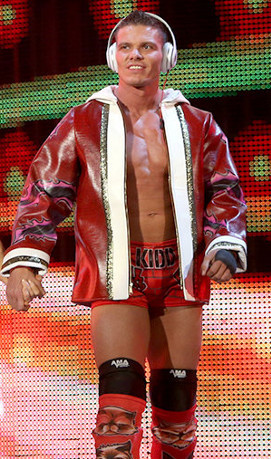 Theodore James Wilson (born July 11, 1980) is a Canadian former professional wrestler currently under contract with WWE. As the final graduate of the infamous Hart Family Dungeon, Wilson made his wrestling debut in 1995 at the age of 15 and worked for organizations such as Stampede Wrestling (under the ring name "Stampede Kid"), New Japan Pro-Wrestling, All Star Wrestling and AWA Superstars of Wrestling (under his own name). He signed developemental contracts with WWE in 2006 where he performed as Tyson Kidd for Deep South Wrestling and Florida Championship Wrestling, accompanied by his then real-life girlfriend and current wife Natalya Neidhart.

Kidd made his WWE television debut in 2009 on its ECW brand as a Heel and formed The Hart Dynasty with Natalya and David Hart Smith, son of British Bulldog Davey Boy Smith. The group was drafted to the SmackDown Brand later that year and won the Unified WWE Tag Team Championship twice. After a brief face turn the group disbanded in 2010 and Tyson was toiling in the undercard for the next two years. He formed another tag team with Justin Gabriel (2012-2014) and later Cesaro (2014-2015), winning the WWE Tag Team Championship with Cesaro. Wilson suffered a severe neck injury during a dark match on June 7, 2015 at the hands of a botched Muscle Buster from Samoa Joe and has been inactive since, later transitioning into an off-screen role in production.