It's not paranoia! It's the Usos! 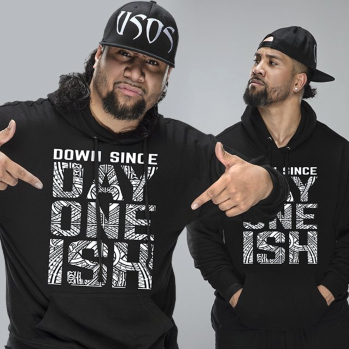 Line 'em all up, knock 'em down like this!
L-R: Jimmy, Jey
Advertisement:

Jonathan Solofa Fatu and Joshua Samuel Fatu (born August 22, 1985) are a Samoan-American Tag Team known to WWE viewers as The Usos, Jimmy (Jonathan) and Jey (Joshua). They debuted in 2007 under their real names for the World Xtreme Wrestling promotion, run by their uncle, Afa. They named their team The Samoan Soldiers and also made appearances in Texas based Xtreme Championship Wrestling, Anarchy Wrestling in Georgia and NWA Prime Time, winning tag team gold in Booker T's PWA before they jumped to WWE. They became the Uso Brothers, Jimmy and Jules, in WWE's developmental program FCW, where they were 1x FCW Florida Tag Team Champions

. They debuted in WWE in 2010 as heels, feuding with the Hart Dynasty. They turned face via their feud with the Corre on WWE NXT in 2011 and remained faces for around five years, during which they won the WWE Tag Team Championship twice. In 2016, shortly into the renewed brand extension, they turned heel by assaulting the most popular team on the WWE SmackDown brand, American Alpha. Since then, they've racked up a total of six tag-team championship reigns.

"Had the weight of the wiki on my shoulders, felt like a trope list on a page full of folders":

The troper writing this article is then taken to the Uso Penitentiary.