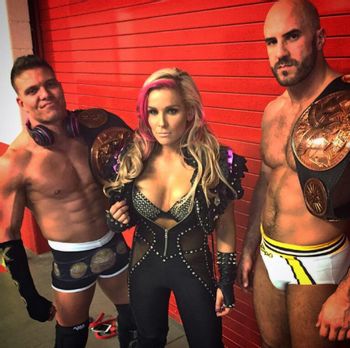 Tyson Kidd and Cesaro are a professional wrestling tag team who are currently signed to WWE. They formed a tag team in December 2014, and are accompanied to the ring by Natalya Neidhart, Kidd's real-life wife. The duo won the WWE Tag Team Championship from The Usos in February 2015 at Fastlane. They would hold the titles for around two months, eventually dropping them to The New Day at Extreme Rules in April 2015.

The team was unfortunately forced to split up due to Kidd suffering a near-fatal neck injury during a dark match against Samoa Joe. Cesaro and Natalya returned to singles competition, while Kidd, after undergoing surgeries and treatment, transitioned into a backstage role.